Everything You Need To Know About Biometrics In Cybersecurity

The increasing number of network security breaches and data breaches, as well as the rise of identity theft, indicates the necessity of stronger authentication systems.

Biometric security systems are one such way.

Biometric security measures an individual’s physical characteristics before granting access to an environment, a server, or a computer.

Biometric security is becoming widespread for protecting cyberspace from hackers and other malicious individuals among individuals, organizations, and businesses.

Iris scans, fingerprint scanners, and facial recognition have all become mainstream thanks to tech giants like Apple Inc.

Because biometrics is rapidly evolving, we anticipate overtaking traditional security in just a few years.

This article will address the following questions:

In this article, we’ll closely examine biometric security and everything you need to know about it. 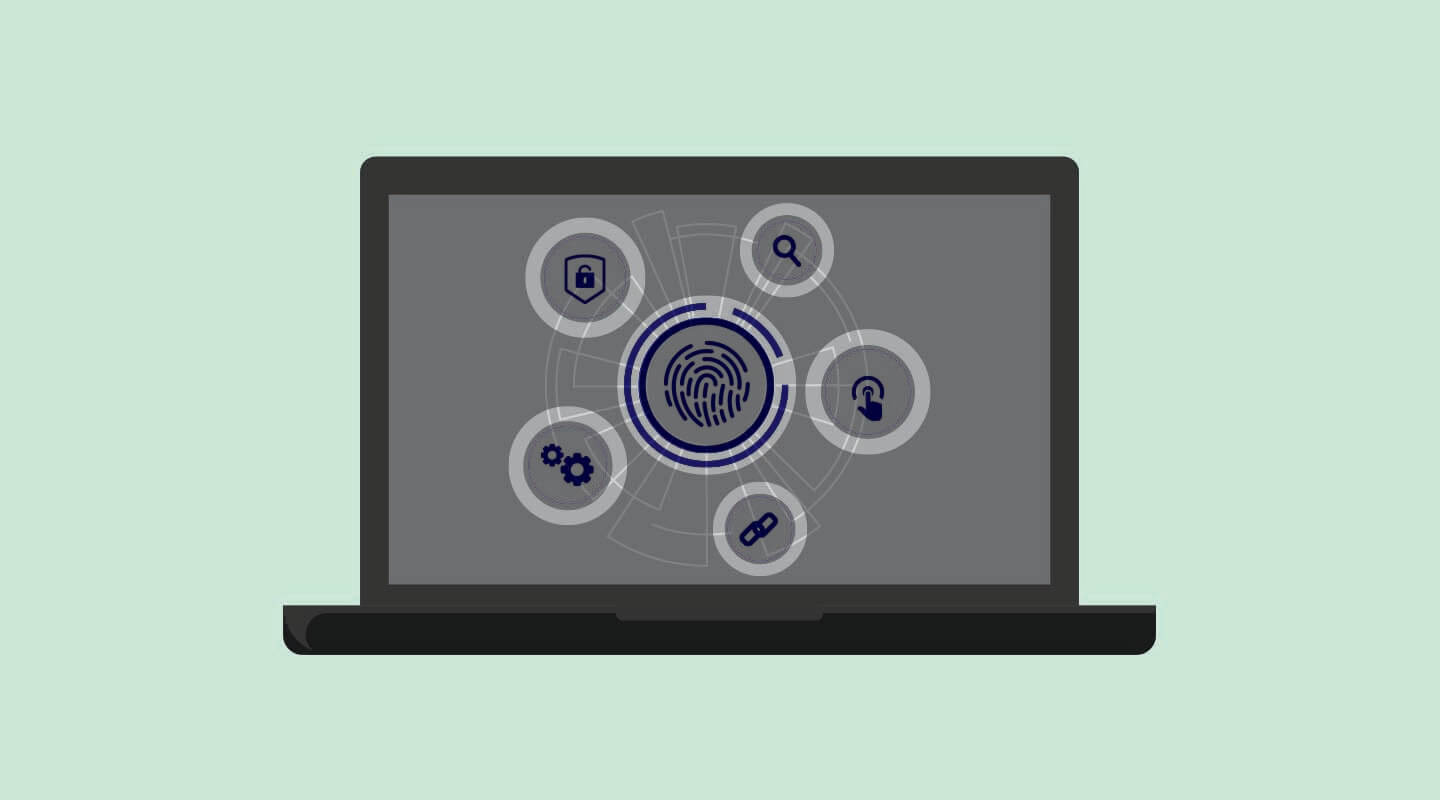 Biometrics is the statistical analysis and measurement of people’s unique behavioral and physical characteristics.

The technology is mostly used for access control and identification and for identifying people under surveillance.

Retina scans, facial recognition, and fingerprint mapping are all examples of biometric technology, although these are only the most well-known.

Other unique identifiers, according to researchers, include the veins in one’s hands, unique body odors, the way someone walks and sits, the shape of an ear, and even facial contortions.

What is Biometrics in Cybersecurity?

Biometric security is a type of security that verifies people’s behavioral and physical characteristics to identify them. It is the most accurate and strongest physical security technique for identity verification.

Biometric authentication indicates that individuals can be accurately identified based on their intrinsic behavioral or physical characteristics.

Security systems mostly use biometrics in environments where physical security is crucial, and theft is a concern.

These biometric security systems store and use physical characteristics that remain constant over time, such as hand patterns, facial recognition, retinal patterns, and fingerprints.

The system stores these characteristics as “templates.”

If someone tries to access the biometric security system, it scans them, analyzes their characteristics, and compares them to previously saved records. The person is then granted access to the facility or device if a match is found.

Because of the lower cost, fingerprint sensors have become the most widely used biometric security system. But, iris recognition systems are mostly used in high-security environments for the best accuracy.

How Do Biometric Security Systems Work?

Biometric verification provides both convenience and security, as there are no security tokens to carry or passwords to remember.

Some biometric technologies, such as gait analysis, can work without requiring physical contact with the authenticated individual.

The following are components of biometric devices:

The system saves a person’s biometric data when collected and matched so that it can be matched with subsequent access attempts.

Biometric data is usually encrypted before being saved on a remote server or device.

Scanned biometric data are compared to the saved database, and access is restricted or granted depending on whether a match is detected.

What are the Types of Biometrics?

Behavioral and physical characteristics are the two main types of biometrics used for security.

In vein recognition, a person’s finger’s (or hand’s) unique pattern of blood veins is used to identify them. It maps the veins beneath the skin of your fingerprints or hands using infrared light.

The unique pattern of someone’s retina or iris is used to identify them in iris or retina recognition.

Because an iris scan requires minimum light pollution, a camera that can see IR, an infrared light source, to ensure accuracy, this biometric verification method is more difficult to implement.

Face recognition systems use a person’s unique facial anatomy to identify them. It can be used in many areas, including law enforcement, credit card payments, smartphones, and even fried chicken purchases in China.

It’s one of the most widely utilized biometric verification methods, with applications ranging from mobile phones to vehicles to buildings.

On the other hand, behavioral biometrics evaluates individuals’ unique ways of acting or any pattern of behavior linked to a certain person.

Behavioral biometrics include the following:

Gait recognition uses a person’s walking style to identify them. Because everyone walks a little differently, observing how they place one foot in front of the other is a good approach to confirm their identification.

To verify someone, voice recognition (or voice biometry for cybersecurity purposes) uses the unique frequencies, pitch, and tone of their voice.

This is widely used to validate users when they call a call center for customer service assistance, such as online banking.

What are the Use Cases of Biometrics?

Biometric security solutions are becoming increasingly popular in banking and retail environments and on mobile devices. Nowadays, many other fields also use biometrics.

Let’s take a closer look at the organizations and fields where biometrics is currently used to enhance security.

Biometric security systems verify an individual who wants to enter a home.

Biometrics are commonly used for airport security. Many airports use iris recognition to verify the identity of an individual.

One of the financial applications of biometrics is biometric payment security. This technology is used to authorize transaction processes, and fingerprint scans are widely used.

Biometric security is also used for insurance programs and identity cards in health care. Fingerprints are the most common type of biometrics for identification in the healthcare field.

Biometric authentication has been integrated into Android and iOS smartphones over the last decade, and now you can experience fingerprint scanning in any modern smartphone.

The good news is device biometrics has now progressed beyond mere fingerprints. For example, Intelligent Scan is a Samsung-developed biometric security function. It provides biometric multi-factor authentication by combining facial recognition with an iris scan.

Take, for another example, Apple’s Face ID, which projects over 30,000 infrared dots onto a user’s face, analyzes the pattern, and creates a “facial map.” Later login attempts are then authenticated using that map.

In the banking sector, many customers have grown tired of having to prove their identification regularly, yet without it, the risk of identity theft will continue to increase.

So, bank biometric security systems are in high demand. Many banks use biometrics such as fingerprint scanning, facial recognition, and voice verification in their mobile apps.

Some banks also utilize a combination of biometrics.

That means a nearly impenetrable layer of protection is created when multi-factor authentication is combined with biometrics.

Even biometric technology does not ensure absolute cybersecurity. While biometric security is far more difficult to fool than password security, breaches are still possible.

While high-quality cameras and other sensors are used in biometric cybersecurity, attackers can still attack them.

Attackers can obtain biometric data from people without their knowledge or consent because people do not shield their gait, voice, hands, ears, or faces.

The researchers then attempted to access five security systems using these 3-D models, and four were successfully breached.

After the release of the iPhone X, the researchers used a 3D-printed mask to bypass Apple’s Face ID facial recognition.

They also found that someone related to the authenticated user, such as siblings or children, can defeat Face ID.

As you can see, biometric security can also be vulnerable to breaches, despite its excellent accuracy, and can end up being sold on the dark web.

What are the Advantages of Biometric Security Systems?

Biometric security has plenty of benefits regarding its security, use, and other associated activities.

The following are the advantages of biometrics:

No need for replacement: Cards and fobs can be lost and stolen, often associated with a replacement cost. But, you never lose biometrics.

Fewer Security Staff: Because biometric security systems are mostly automated, there is less need for multiple security employees. So there is no need to hire dedicated security staff; companies can save a lot of money.

Increased Efficiency: Users can be authenticated in less than one second using biometrics. Because there is no need for manual identity checks like passwords and PINs, companies can save a lot of time.

The user’s biometrics is inherent: Biometrics are generally the same throughout a user’s lifetime. In most situations, a person’s facial geometry, retinal patterns, and fingerprints will never change.

What are the Disadvantages of Biometric Security Systems?

Biometric security also has numerous drawbacks. The following are the disadvantages of biometrics:

If your biometric data is compromised, they cannot be reset: You can’t change your fingerprints like a PIN if stolen.

Biometric devices are expensive: Getting a biometric system up and running is still far more expensive than traditional security devices.

Scanning challenges: If you’re wearing spectacles during an iris scan, this could cause issues and slow down the authentication procedure.

Expert knowledge: A biometric security system requires not just a sensor, a computer, and the appropriate software, but also the programming expertise of a programmer to run the system.

Environmental impact: There can be higher error rates in very cold environments, which can lead to detrimental results.

How can you improve biometric security?

Because of the threats to safety and privacy, biometric systems must have additional safeguards. When systems require various forms of authentication, such as live detection (such as blinking) and matching encoded samples to users within encrypted domains, unauthorized access becomes more difficult. Strong internal passwords, anti-spoofing software, and multi-factor authentication can also help organizations protect biometric data.

Why is it difficult to defeat biometric security?

Biometric security systems frequently include anti-spoofing technology and they rely on the analysis of a large number of data points.

Biometrics are highly accurate as they are hard to steal or fake. So they are safe when you use them correctly and under cybersecurity guidelines.

Where is biometric security highly used?

A Complete Guide to DDoS Attacks: What They Are and How to Protect Yourself

What are Deepfakes, Their Threats, and How to Avoid Them?

A Complete Guide to DDoS Attacks: What They Are and How to Protect Yourself

What are Deepfakes, Their Threats, and How to Avoid Them?