Kape Technologies just bought ExpressVPN for $936 million, a decision that both of the co-founders of the renowned VPN service were adamant about.

Peter Burchhardt and Dan Pomerantz claimed that this sellout would enable ExpressVPN to “accelerate product development, deliver even more innovation to our users, and protect them from a wider range of threats.”

You can read more about the details here.

The VPN service claimed it would retain its independence and keep working on its projects with HMD Global, HP, Dynabook, Acer, and Philips.

According to Kape Technologies, ExpressVPN has more than 3 million customers, and over 40% are in North America. Financially, the privacy provider had revenue of $279 million in 2020.

In a blog post, the spokesperson of ExpressVPN claimed that the company was “impressed by Kape’s clear commitment to protecting the privacy of its users.”

However, this wasn’t always true. Before it started buying VPNs, Kape Technologies was better known under its previous name Crossrider.

Crossrider was infamous for specializing in scareware and malware.

At some point, Malwarebytes discovered that the company was hiding malware in various installation packages whose purpose was to hack internet browsers.

But in 2017, Crossrider was renamed Kape Technologies and changed its business goals to VPN services.

Ido Erlichman, chief executive of Kape Technologies, had this to say about their newest acquisition:

“Controlling one’s digital presence is at the forefront of every tech consumer’s mind now, and Kape is more committed than ever to innovating and delivering the tools internet users need to protect their data and rights”

Kape Technologies would double its customer base of 3 million users to 6 million, a leap forward that will undoubtedly transform the company into a top-tier VPN firm.

However, not everyone is content with ExpressVPN’s sellout. Many privacy experts are questioning the motives of the former malware business Crossrider, now known as Kape Technologies.

Among the most vehement protesters are many members of the ExpressVPN Reddit community. 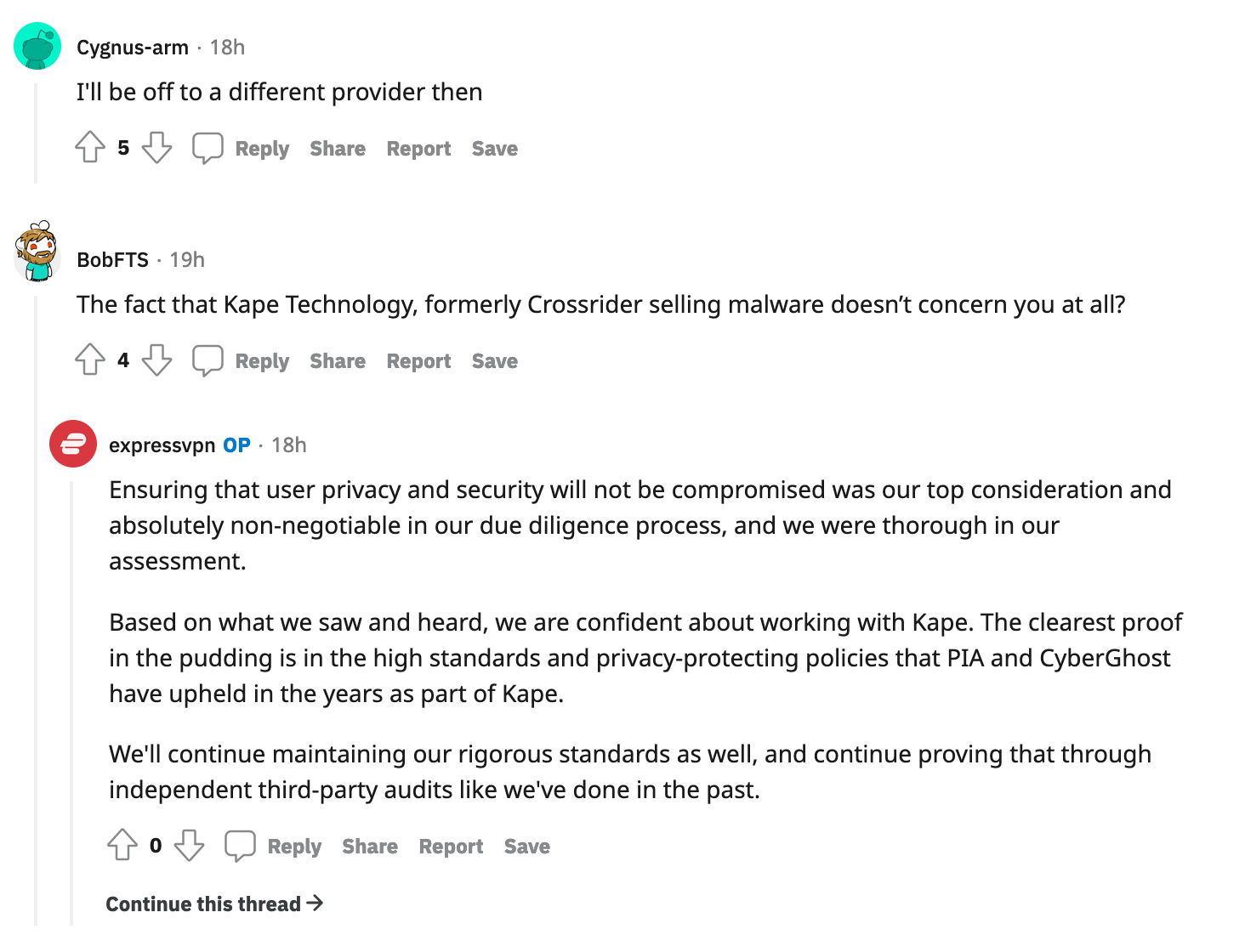 They’re lamenting the fall of another great VPN service and contemplate canceling their subscriptions and moving to another privacy provider.

Whether they follow up on their threats or not, one thing is sure – ExpressVPN may stand to lose a portion of its customer base thanks to this sellout.