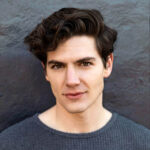 Your voter information is for sale on the Dark Web and millions of others in your state… at a shockingly low price tag. Didn’t vote? They know that too.

Our research found that the records of more than 107 million Americans are sold on the dark web for as cheap as $10.

The leaked data also shows if you previously voted and in which election.

We discovered the below voter databases on a popular dark web marketplace:

Commonly known as “voter files,” these databases are created by government agencies and elected officials.

These voter files illustrate voter registration and election turnout by state. They include who is registered to vote, who voted in past elections, and outside data sources from consumer data vendors, credit bureaus, and political organizations like the DNC and GOP.

This is how dark web listings of leaked US voter databases look like: 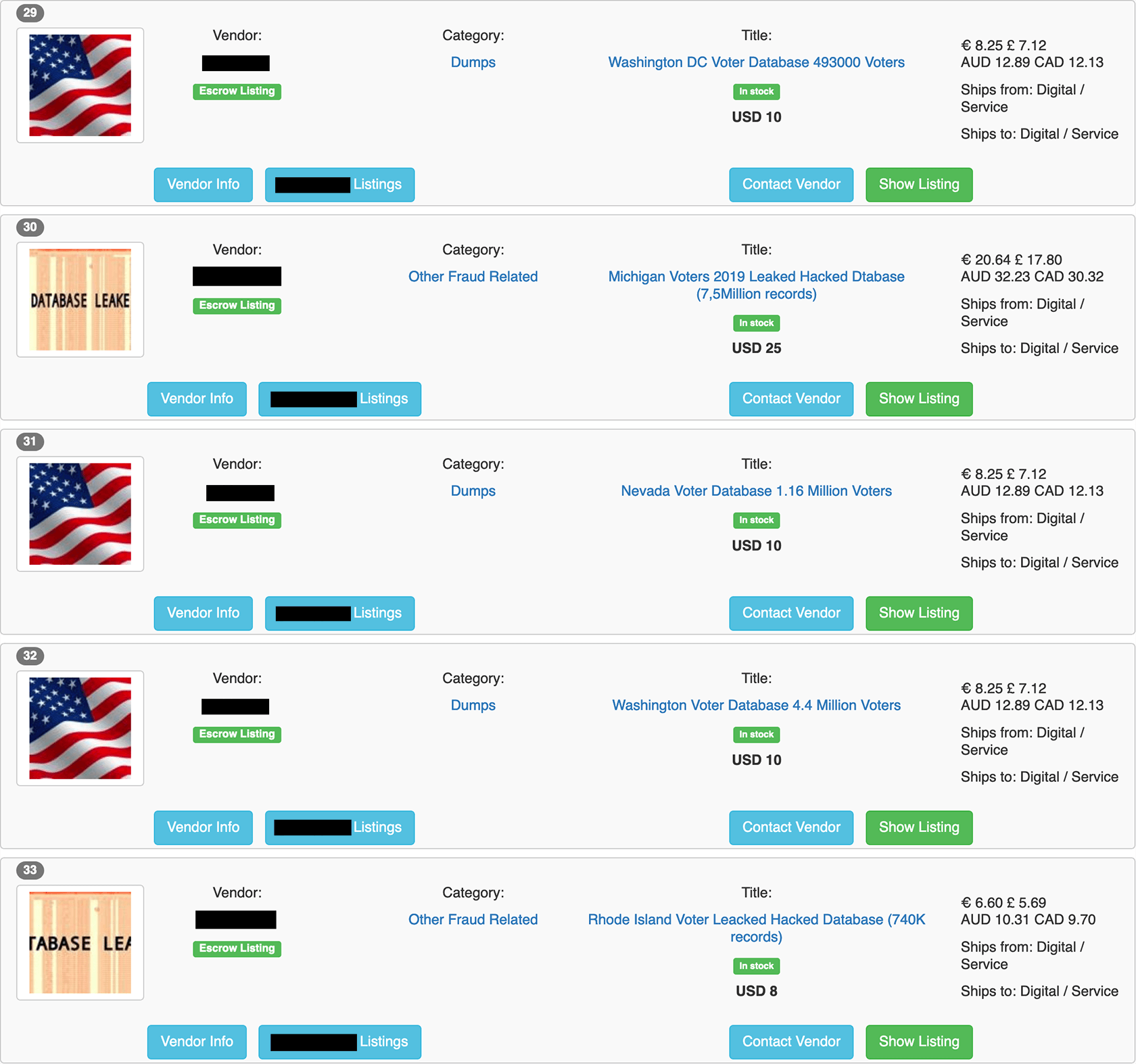 *Names of vendors have been removed to prevent promoting these services and vendors.

Due to the enormous value of this information in the right and wrong hands, election officials had spent millions of dollars to upgrade cyber defenses and thwart hackers ahead of the 2020 election. While the main fear has been foreign actors’ manipulation of voter data, the sinister uses of just accessing voter databases remain out of the public eye.

Full and partial voter databases on up to 27 of the 50 United States and millions upon millions of citizens’ private information are being sold by a handful of vendors. On average, most databases sold for around $10. There are also voting records available for other democratic countries like the Philippines. By in large, the leaked databases for sale include the following personal information:

Look at the most popular state, the most expensive, and other highlights.

Arguably The Most Dangerous Place to Be a Voter: Florida

When looking to purchase voter data, Florida is by far the most listed state. Voter Databases (like the one above) is available over millions of Floridians and contains the following information:

Although the Voter Registration Number is listed as a confidential field in publicly available sources, the leaked data contains more information than what the government provides.

In the images below, the prices range from $10 to upwards of $60 for a complete list. For the most part, Florida voter databases sell relatively cheaply due to their publicly available nature. 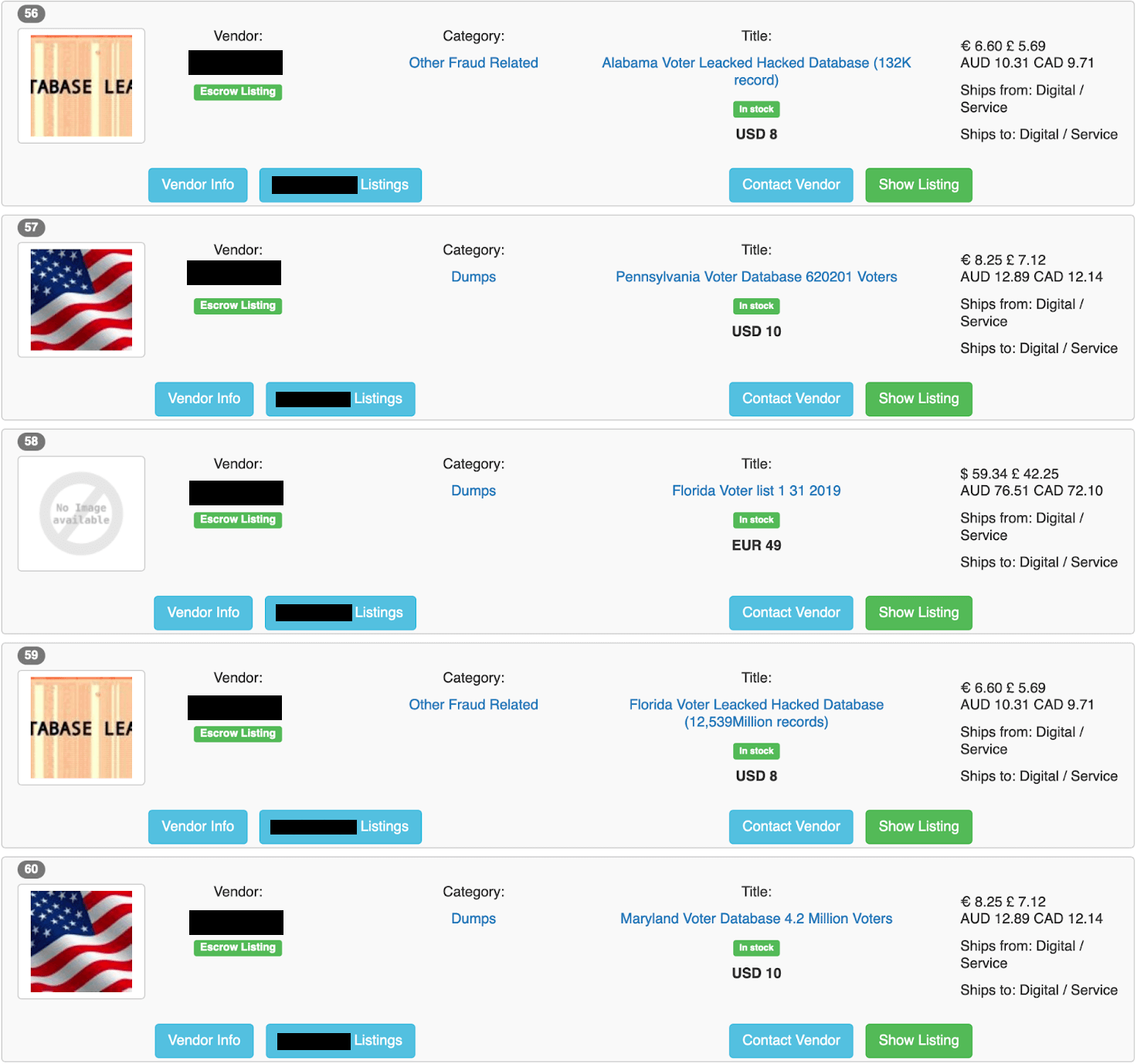 The Most Expensive Voter Files: Wisconsin

As seen in the top row of the image below, Wisconsin claims the highest price tag at a whopping $242.24 (200 EUR) for a full voter database. It doesn’t even need to advertise the number of records. 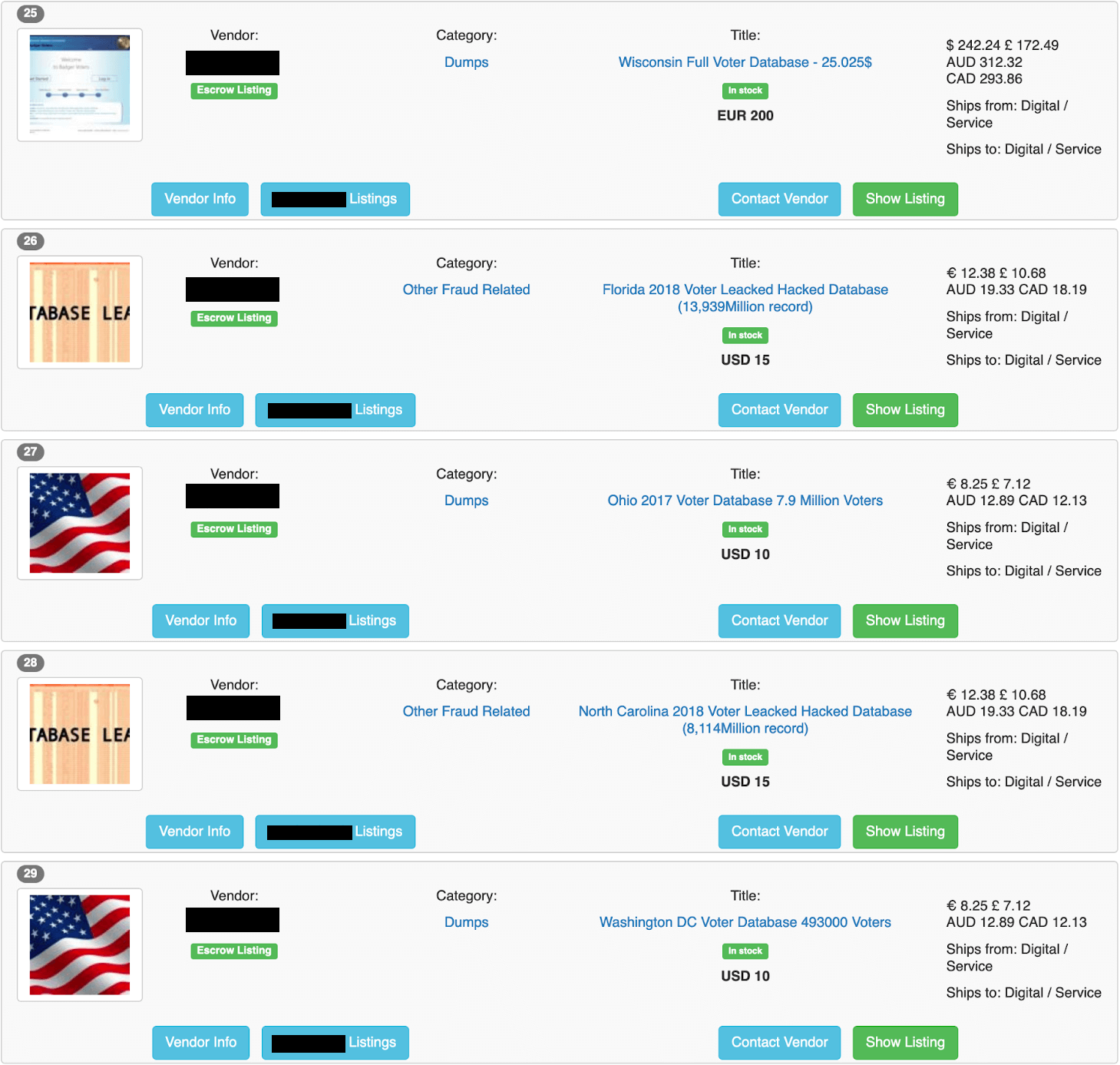 The Second Most Expensive: Pack of 27 States

A specific vendor lists a package of voter database information from 27 states for $100. 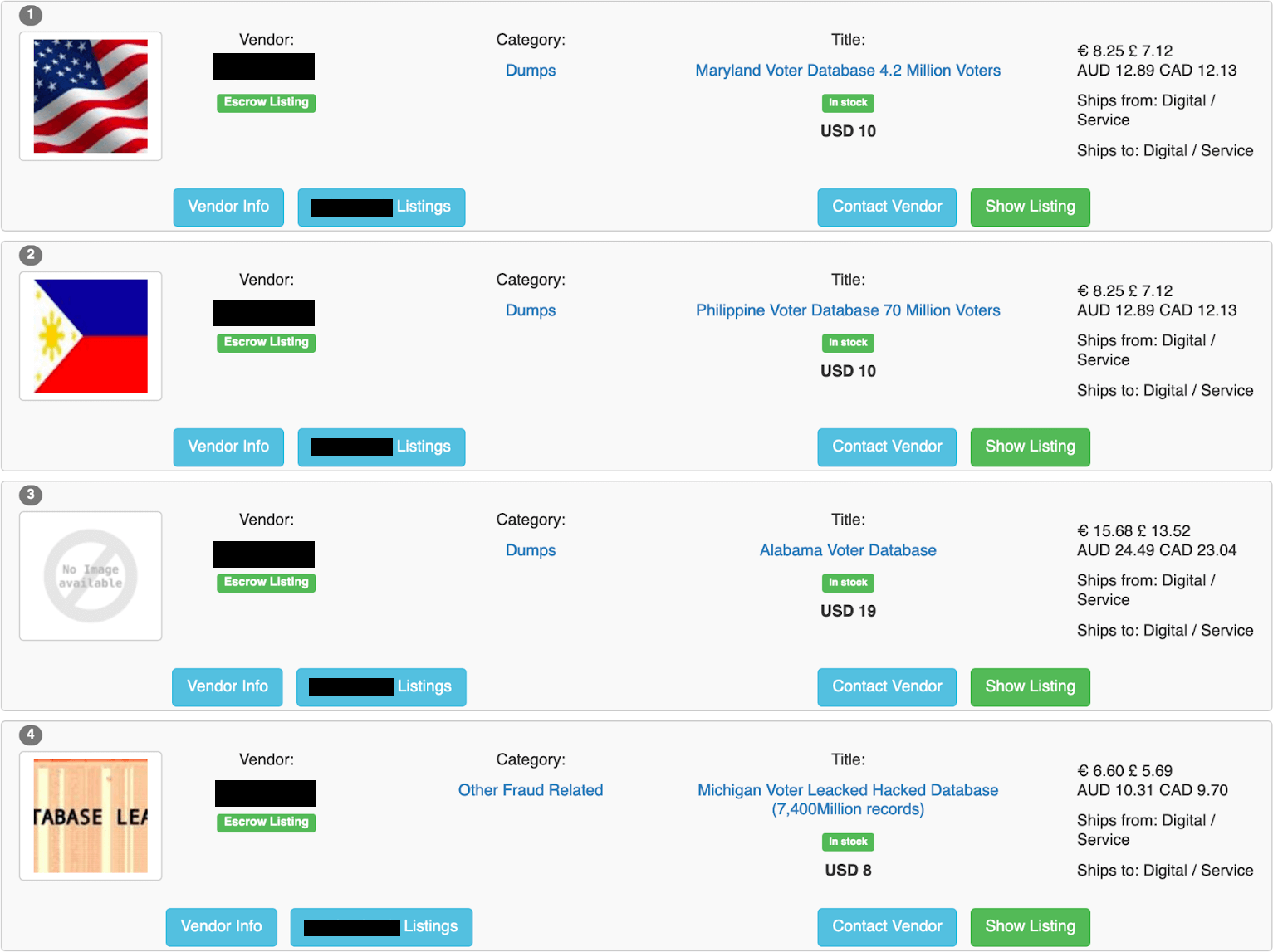 Separate packages are also available on a per State basis in the case of the USA.

You can find a few samples of these below: 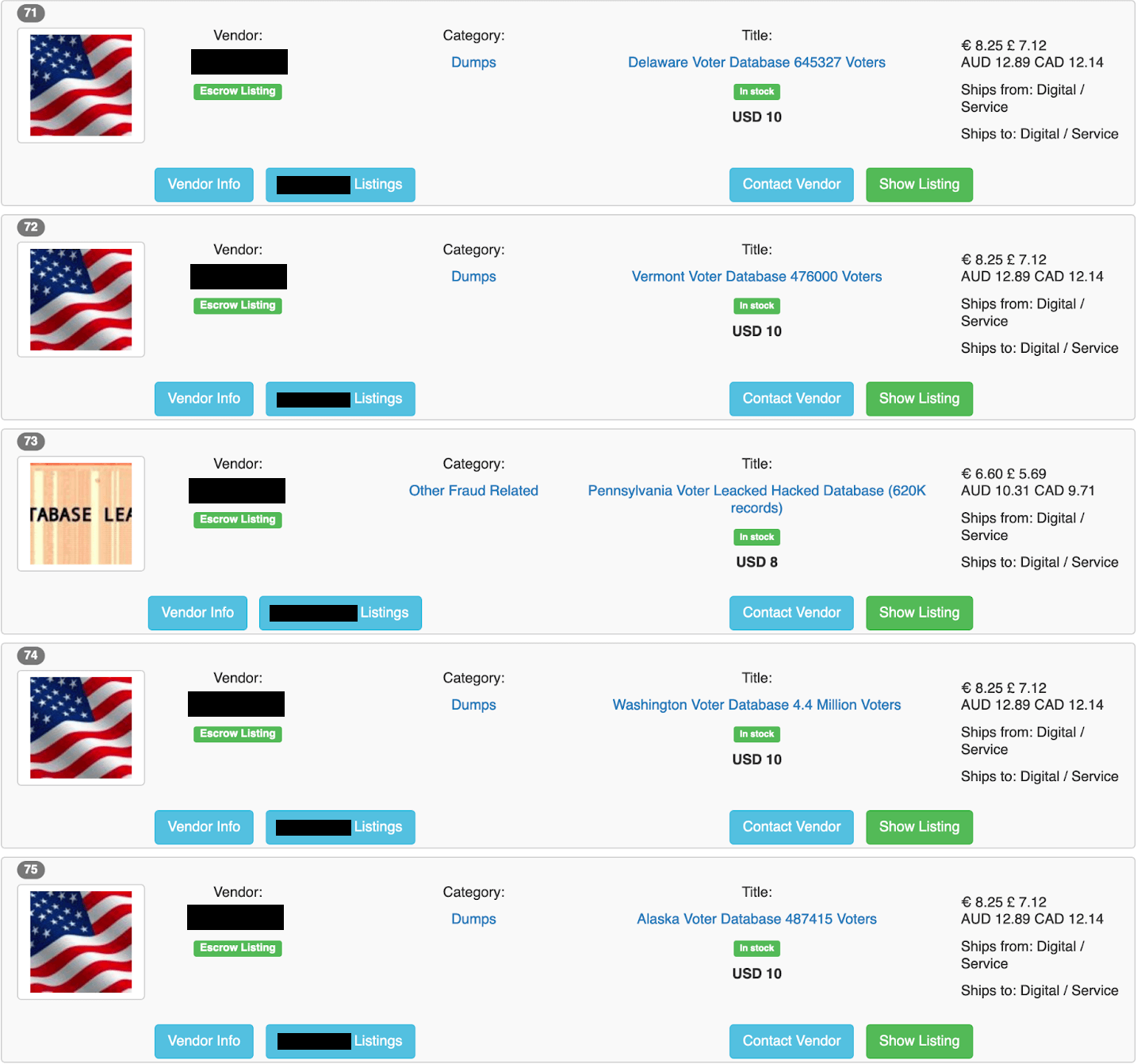 The Value of Voter Data

To ease any impending anxiety for the closet conservatives or the blue specks in the Red Sea, in both official voter databases and hacked Dark Web databases, for whom you cast your vote remains completely confidential. Your actual vote remains private at the ballot box. However, before you sigh of relief, the data does show if you voted, and in what election.

In the U.S., each state determines the rules around accessing voter databases, including who can purchase the lists, what data remains confidential, the protected classes of voter data (e.g., pre-registered), and how the voter information can be used.

The National Conference of State Legislatures (NCSL) reports state-by-state rules for voter registration lists, and in most cases, databases of voter information are either publicly available, able to be purchased for a fee, or reserved only for political campaigns and government usage.

These lists, along with their consulting services, allow candidates to target audiences better and create maps of “potential voters based on their location, status, race, and marital status.”

By selecting voters who live within a specific distance, housing development, etc., Kaplan creates “walk lists” for campaigners to go door-to-door efficiently. They are also able to determine voting habits, including tendencies to vote early or by absentee, primary election voters, or habitual vs. episodic voters.

Massive voter files are also collected by the Republican National Committee (the GOP) and the Democratic National Committee (DNC) to aid their respective candidates. Also, specialists, such as GOP Data Center for Republicans and NGP VAN for Democrats, supply data in accessible forms for election campaigns.

These overwhelming advantages of voter data for a candidate are further magnified when the opposing candidate doesn’t have access to the same information. Take Bernie Sanders, for example.

That Time Bernie Sanders Felt His Own Bern

The DNC voter files store massive amounts of public information gathered across various government offices, including names, addresses, elections voted in, and in some states, date of birth, and gender. While each Democratic presidential candidate has access to the DNC data and can populate the database with their own collected information and analysis, they are not allowed to see voter data compiled by rival candidates.

As a punishment, the DNC temporarily barred Bernie Sanders from accessing voter files, locking the presidential hopeful out of extremely valuable data for his day-to-day operations. Without access to these DNC files, Sanders was practically launched back to the pre-2000s era of running a campaign. The Sanders campaign lost its ability to target voters via door-to-door campaigns and curated email and phone lists. And the rest is history.

Why This is Important

While most of the voter data is easily accessible or available for purchase, the main difference is the US government’s ability to track who has the information and for what purpose. When purchased, downloaded, or viewed, the election agencies have oversight into the data and how it changes hands. On the Dark Web, no such capability exists, so hackers and foreign parties have free range over this sensitive data.

With this, foreign actors can predict how candidates will run their campaigns and be better positioned to manipulate and interfere. Their biggest tool? Social media.

What can you do?

The very first step to overcoming social influence is recognizing that it is there. During the next election cycle, and you are scrolling the FB timeline, be aware of the various people and posts. Most likely, these are just robotic attempts to influence you using tailored information based on your personal information.

Being aware of the subconscious effects of these subliminal influence tactics could be minimized. There are great documentaries like The Big Hack, stories like Russia’s social media influence on Ukraine, the Brexit scandal, and more recent US elections for more information on how social media and voter data to influence elections.

Data privacy specialist, consumer psychologist, and foreign policy researcher. Zachary gravitates towards the cutting edge fields of cybersecurity and privacy risk management to help organizations across industries safely pave the way into green pastures. Zachary has consulted IoT and IIoT companies on SSDLC and Privacy-by-Design, Fortune 500 retail companies on US and foreign governance documentation, and just about everything in between. Previously, Zachary got his start by working abroad in Shanghai as a Mandarin translator for a large, cybersecurity-consulting firm.