Everything You Need to Know About MITRE ATT&CK Framework

The MITRE ATT&CK framework is a great place to start studying the latest attack tactics and techniques of cybersecurity. When planning and executing cybersecurity protections, it’s also a useful checklist.

In this article we will guide you through: 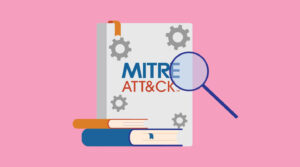 What is the MITRE ATT&CK Framework?

You can access it from anywhere on the globe The purpose of the Mitre Att&ck Framework is to give you the knowledge of all the security attacks that happened in the past and tactics techniques used for them so you can measure whether your security defensive mechanism is good enough to prevent them or what new actions you should take to avoid possible attacks.

This framework aims to strengthen post-compromise adversary identification in businesses by displaying the activities an attacker could have performed. This framework address the following questions and areas.

How did MITRE come to exist?

MITRE is a non for profit organization that advises the federal government on engineering and technological matters.

In 2013, the group created the framework to be used in a MITRE research project and called it after the information it collected(ATT&CK – Adversarial Tactics, Techniques, and Common Knowledge).

MITRE ATT&CK was made freely available to the general public in 2015. However, it now assists security teams in a variety of industries.

MITRE ATT&CK Matrix is a graphic representation of all existing tactics and techniques in an easy-to-follow manner. Mainly there are several different matrices as given below,

This matrix concentrates on activities that occur before an assault and are mainly hidden from the institution’s view.

It assists security teams in understanding how attackers conduct an investigation, choose their entry point, and monitor and identify attacker actions outside the company network.

Techniques used to hack all versions of Windows OS.

Techniques used to hack all variants of Linux, such as Ubuntu.

This risk model describes how attackers can penetrate mobile devices using various tactics and techniques. “Network-based impacts” are assault methods that can be carried out without requiring device direct access.

This model mainly explains the actions taken by an attacker in the corporate environment.

It focuses primarily on conduct once a compromise has been reached. The Enterprise ATT&CK matrix combines the matrices of Windows, macOS, and Linux.

Moving forward on how ATT&CK matrix’s are used, individual techniques are shown below each column, with attack tactics displayed throughout the top.

An attacker does not have to deploy all eleven methods at the start of the matrix. Instead, the attacker will employ the fewest number of strategies possible to accomplish their goal, which is more effective and reduces the risk of being discovered.

As shown in the figure, an attack sequence in the Enterprise ATT&CK matrix would have at least one method per strategy, and a whole attack series would be formed by progressing from left to right (Initial Access to Command and Control).

What are the tactics of the ATT&CK Framework?

The first ‘T’ in ATT&CK stands for tactics which is the latest way of considering cyberattacks. Instead of looking into the results of an attack, tactics can recognize an ongoing attack.

Moreover, Tactics can be taken as the “why” of the attack technique. Mainly there are 14 attacks in this framework which are listed below:

What are the techniques of the ATT&CK Framework?

Techniques are represented by the second “T” of ATT&CK. Each approach to a cyberattack consists of a collection of techniques utilized by hackers and threat entities.

Techniques reflect the “how,” which means how the attacker pulled out a tactic. One hundred eighty-five methods and 367 sub-techniques are currently identifiable in the framework.

Each technique describes how threat actors work, including the credentials needed, the platforms upon which technology is most typically used, and how to identify orders or behaviors related to the approach.

What is Common Knowledge in ATT&CK Framework?

ATT&CK ends with the letter “CK,” which refers to “common knowledge.” These are detailed statements of how an enemy intends to accomplish its goal.

Common knowledge is essentially the recording of procedures. Tactics(T), Techniques(T), and Procedures(P) are standard terms for people familiar inCyber Security. However, ‘CK’ is an acronym for “P.”

When it comes to comparison, both these models define the actions taken by an attacker to accomplish their objective.

The primary way the ATT&CK matrix differs from Cyber Kill Chain is that it is a collection of techniques organized by tactics and does not suggest a precise sequence of operations.

However, Lockheed Martin’s Cyber Kill Chain has seven steps, whereas the Mitre Att&ck has ten steps, as shown below.

What criteria does MITRE ATT&CK use to assess security products?

MITRE Engenuity is proficiently the red team(offensive security professionals) during the assessments because it cooperates with vendors.

The seller providing surveillance to MITRE Engenuity is the blue team(defensive security professionals).

The outcome is a “purple squad” that assists in the real-time testing security controls by simulating the strategy that attackers are expected to take in a real-world attack.

Benefits of the MITRE ATT&CK framework:

Challenges of the MITRE ATT&CK framework

The great news is that the Mitre ATT&CK framework’s data permutations are pretty comprehensive. The sad fact is that it is pretty detailed.

It can be intimidating for someone in a company who is just getting started. There is a lot of data to handle, and many organizations haven’t automated much of it to correlate it to the data in their system and their security architecture.

Another challenge is not all behaviors that fit an ATT&CK strategy are malicious. For example, File Deletion is a mentioned technique in Defense Evasion that makes complete sense.

But how could you tell the difference between typical file deletions and a suspect’s attempt to avoid detection?

Similarly, we can see some ATT&CK techniques are harder to identify. Assuming you know where to look out, brute force attacks are pretty straightforward to see.

Despite if you are searching for it, exfiltration using an Alternative Protocol, such as a DNS tunnel, could be challenging to identify.

Example use cases for the ATT&CK framework:

MITRE ATT&CK can be used in a variety of ways by a security team, including:

ATT&CK is among the most comprehensive and authoritative hacker tactics resources available. Cybersecurity firms are increasingly referring to attacking strategies as ATT&CK, and they’re using the MITRE ATT&CK models to create defenses and special software. MITRE updates ATT&CK regularly.

MITRE has recently published a software certification process. MITRE may certify software businesses depending on their capacity to track ATT&CK tactics.

MITRE and other third-party developers use ATT&CK to assist the Red and Blue Teams with their pen-testing and defensive efforts.

The MITRE ATT&CK framework is a great place to start studying the latest attack tactics and techniques of cybersecurity. When planning and executing cybersecurity protections, it’s also a helpful checklist.

It is something that every company should do to improve their cloud presence. You never know when your company will be the next to be targeted by cybercriminals. It’s preferable to be safe rather than sorry.