ProtonVPN began as a project to boost security for customers of private email service ProtonMail, but has evolved to be a well-respected independent product in its own right.

The service is operated and managed by Swiss company Proton Technologies AG, who rightfully claim a long track record when it comes to protecting the online security and privacy of its users.

The people behind ProtonVPN are experienced engineers, developers, and even scientists who are experts in security and other internet technologies. So it shouldn’t be surprising that ProtonVPN now has more than 950 servers across more than 50 countries.

One of the major gripes of cyber security experts is proprietary software – a private source-code that cannot be verified to be secure by the community. To this day, ProtonVPN is the only VPN to have released its software code AND undergone several independents audits.

That’s impressive. It shows complete confidence and trust in their code, transparency, and evidence that there’s no hidden back-doors for government agencies to spy on users.

ProtonVPN uses UDP and TCP protocols under OpenVPN and the IKEv2 protocol. It promises to use only the strongest encryption method — AES-256 encryption — in securing an internet connection. ProtonVPN uses 4096-bit RSA for key exchanging, and HMAC with SHA384 for message authentication.

With all its features, ProtonVPN provides a fairly quick and stable connection for your convenience and peace of mind.

While many VPN vendors offer the same features in every subscription, changing only the duration that the subscription is valid for, ProtonVPN follows a different approach: the higher the subscription plan, the greater the number of features. For each plan, there’s a free 7-day trial, along with a 30-day money-back guarantee. 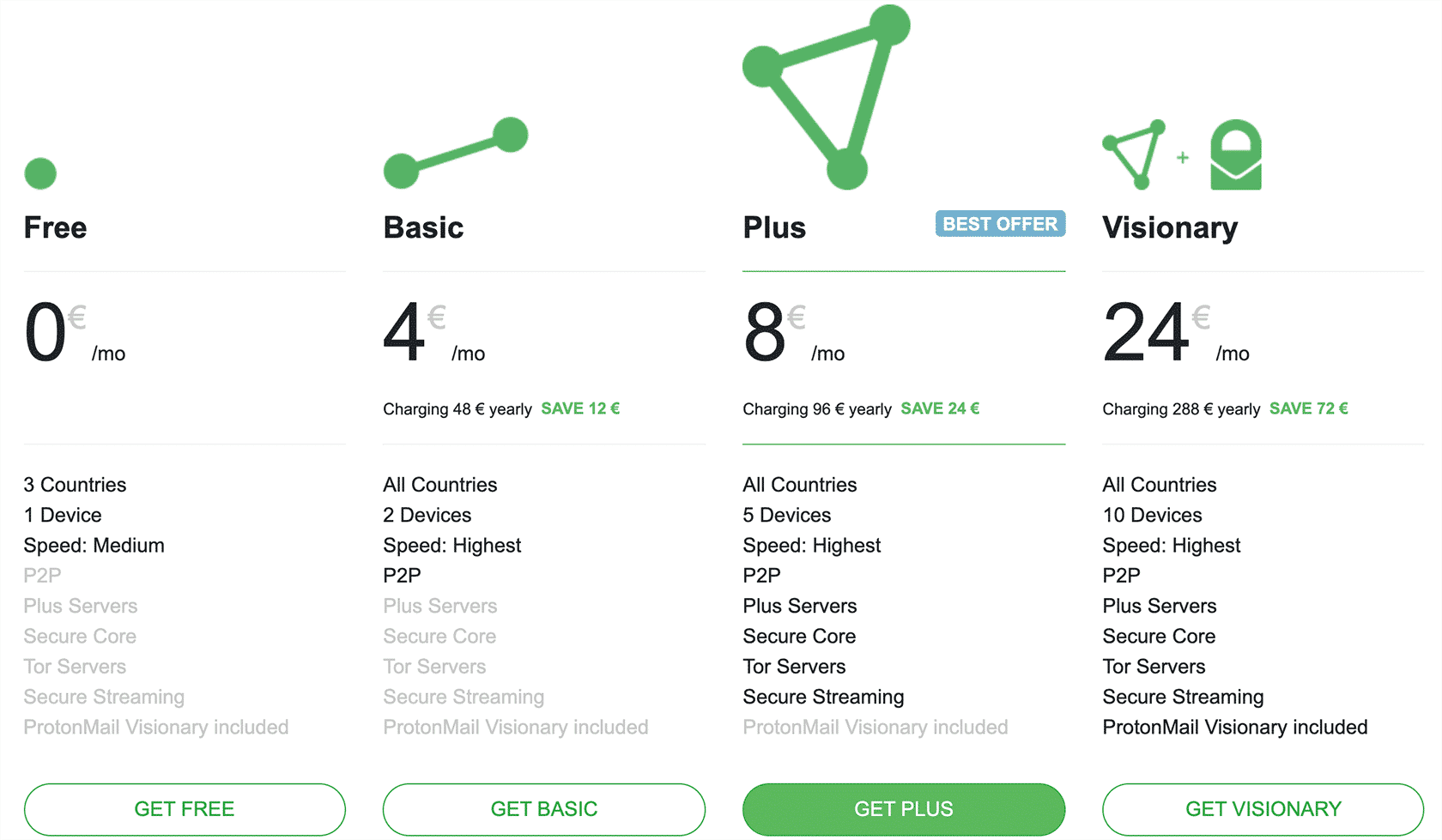 Understandably, the free version has certain limitations and fewer features. If you select a subscription plan other than the free version, you’ll be directed to the payment page. 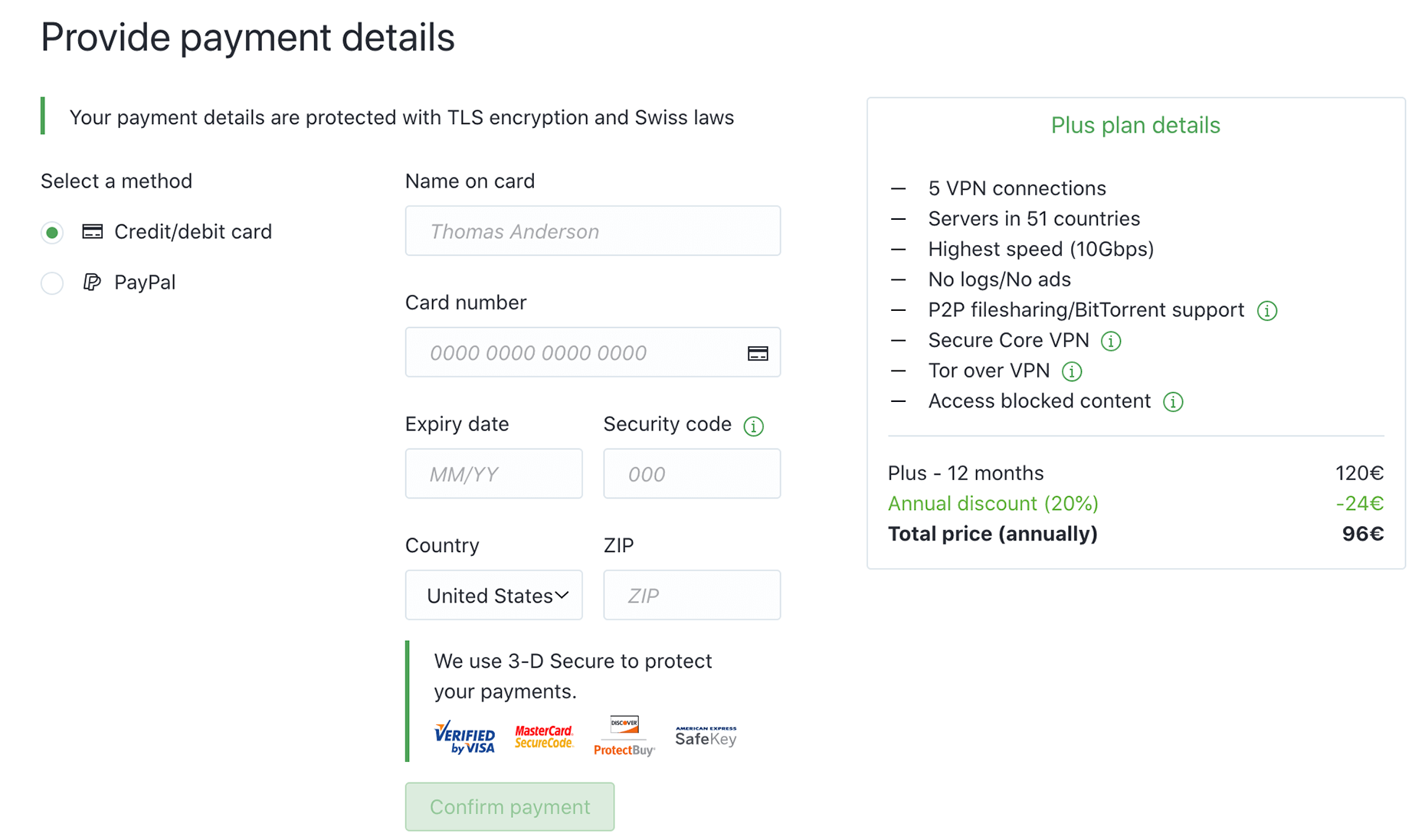 You can pay via PayPal, credit card, or debit card.

Verdict: ProtonVPN is fast enough for a great web experience, and streaming HD content is done with ease. For some gamers the occasionally high ping could be an issue.

Now, let’s check the internet speed from different servers. Note that I used speedtest.net to measure the download and upload speeds.

Here’s my normal speed test without using the VPN service:

Now let’s see how this changes with the use of different VPN servers from different countries.

Now that we’ve checked some of the popular servers, let’s check my speed on the “Quick Connect” profile, which connects me to a Romanian server.

As you can see, the connection is a little slower than my normal internet speed without the VPN. But don’t worry, this is normal! As with any VPN’s encryption and handshaking methods, internet connectivity naturally decreases a little bit.

Verdict: ProtonVPN has easy to use apps for Windows, Mac, and mobile. Linux users need to use the provided command-line tool.

You can download the application for Windows or Mac here.

The download and installation process is easy. Here are some of the basic interfaces in Windows & MacOS…

When you first start the application, you’ll be directed here: 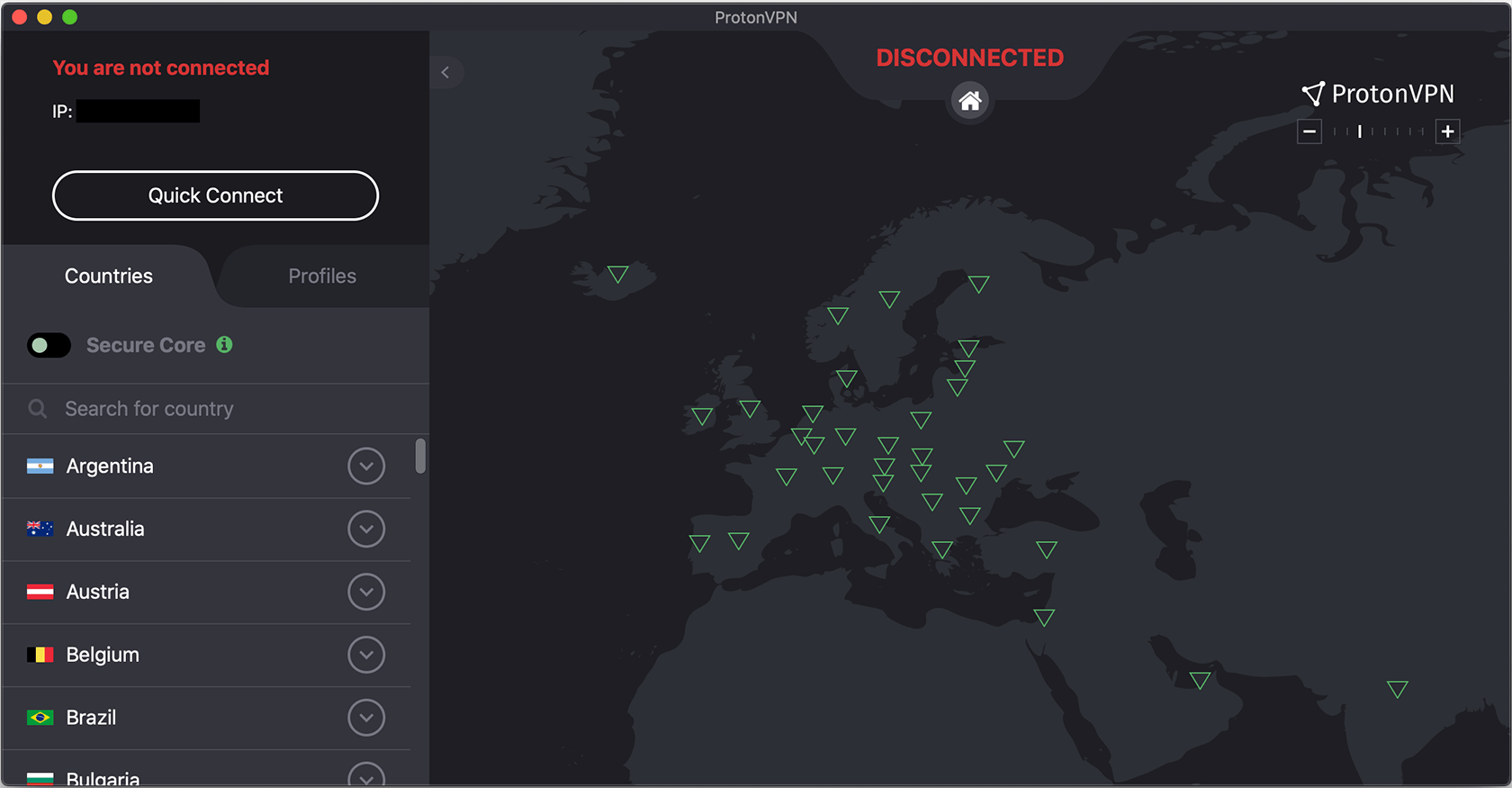 The “Quick Connect” option will connect you to the default profile — the fastest and most stable connection for your location.

Using the menu on the left-hand side of the application you can navigate to the About, Account, Profiles, Settings, Help, Report Bug, Logout, and Exit options.

Under the General tab, you can find your preferred language, whether to start ProtonVPN with Windows, whether to show notifications and settings regarding screen size, and early access.

If you head over to the Connection tab, you’ll see these options: 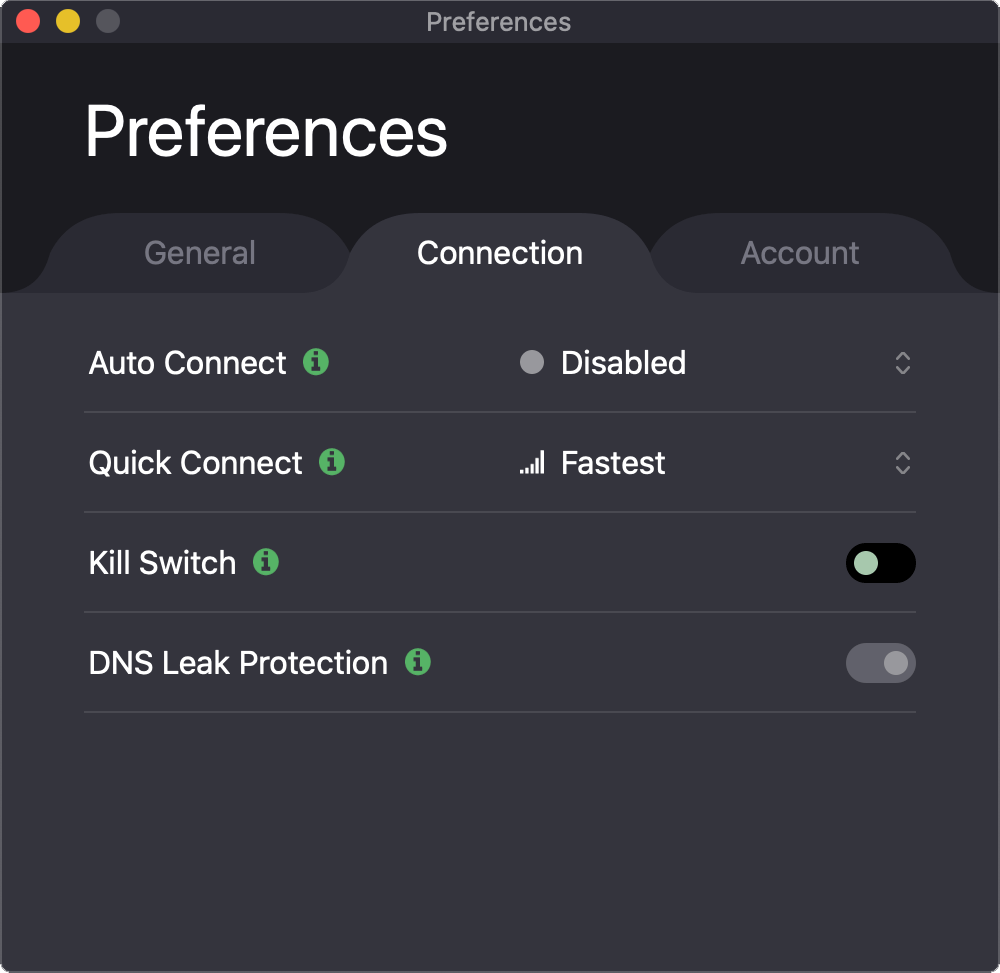 You can choose whether the “Auto Connect” feature is disabled, or connected to the fastest server, or connected to a random server. You can also change your Quick Connect, Default Protocol, and Custom DNS Servers settings. 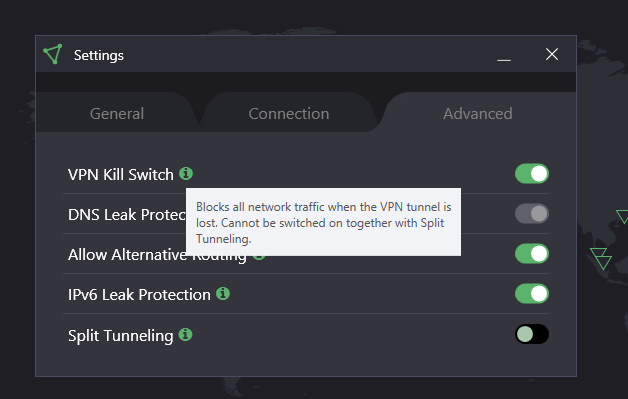 It should be apparent to you now that navigating the application is easy! We’ll discuss other features further down the article.

You can download the application for Android here or go to Google Playstore.

Here are some of the basic interfaces in the mobile application…

The first time you download the app, you’ll be prompted to enter your username and password to get you authenticated. 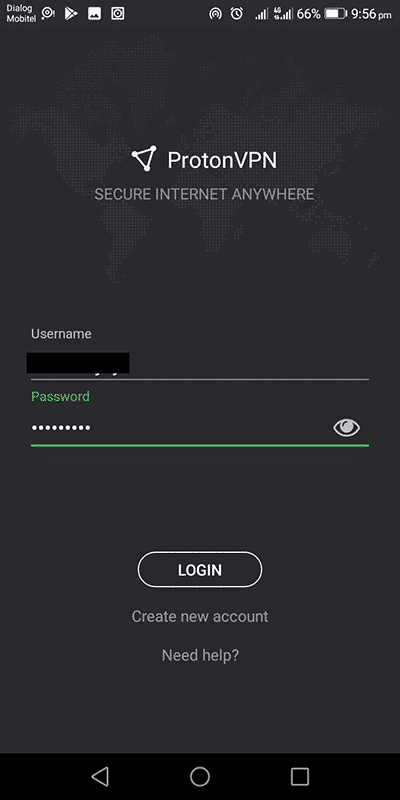 At the start, the mobile version displays message clouds over the various options to guide you. 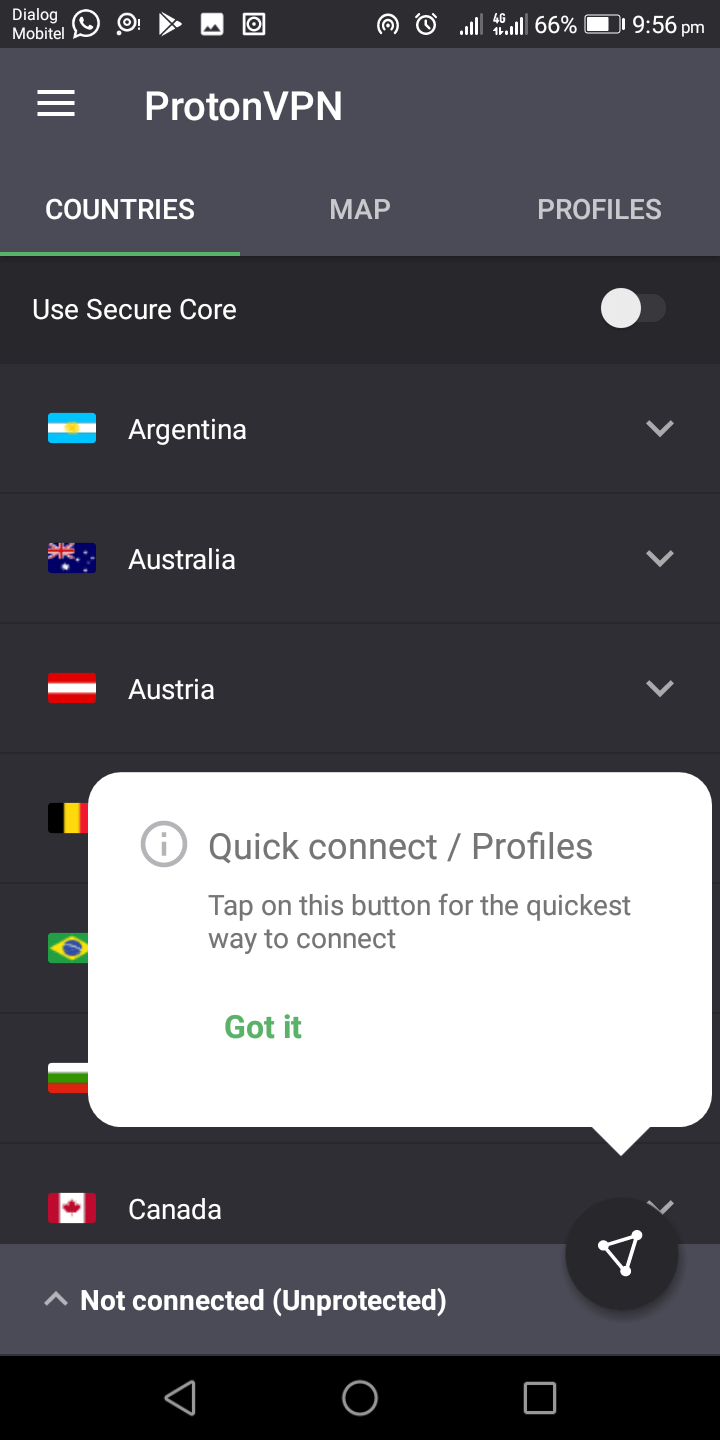 There are three main tabs: Countries, Map, and Profiles. 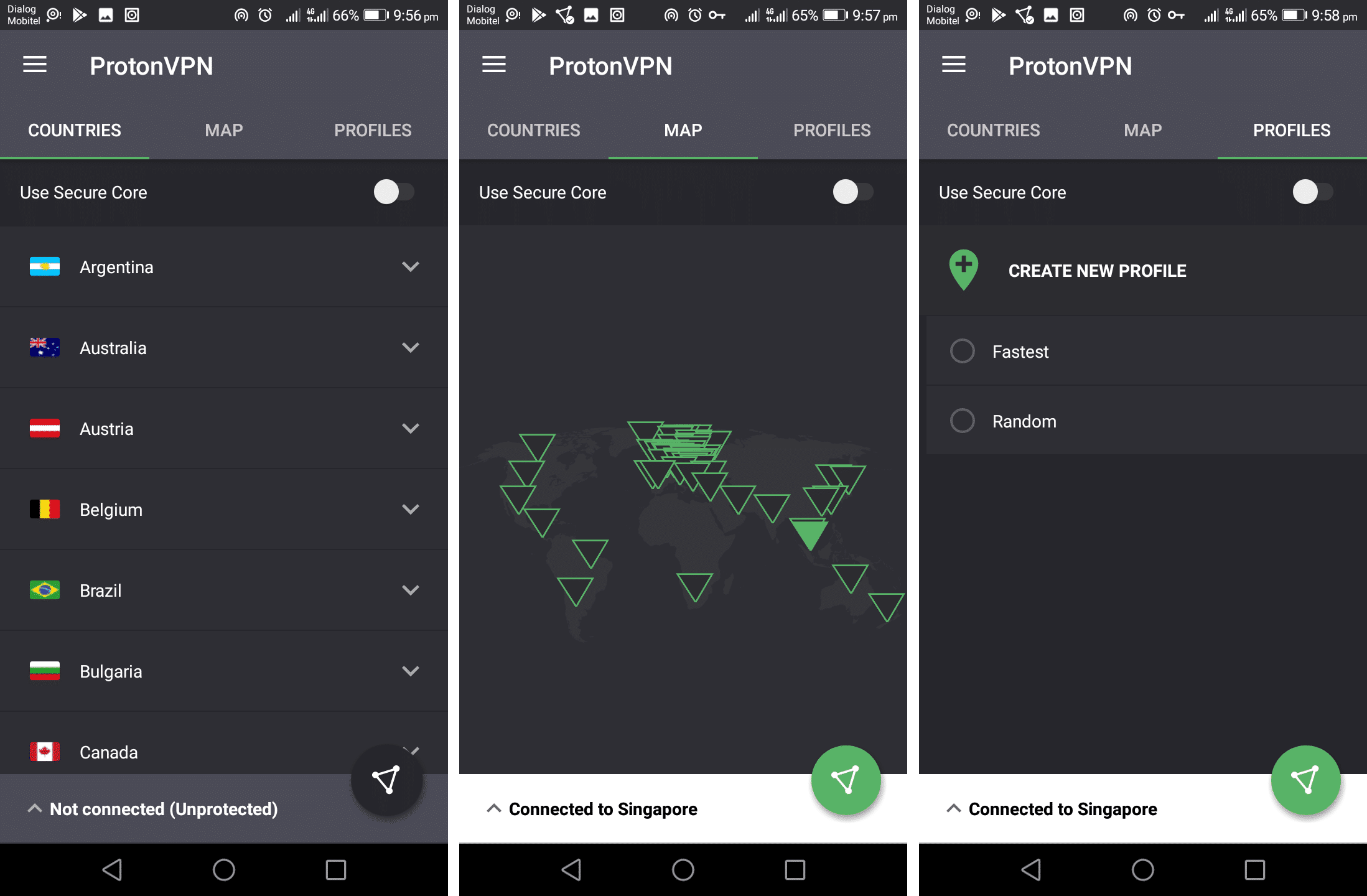 Navigating to other settings in the mobile application is easy, just like in the desktop application. 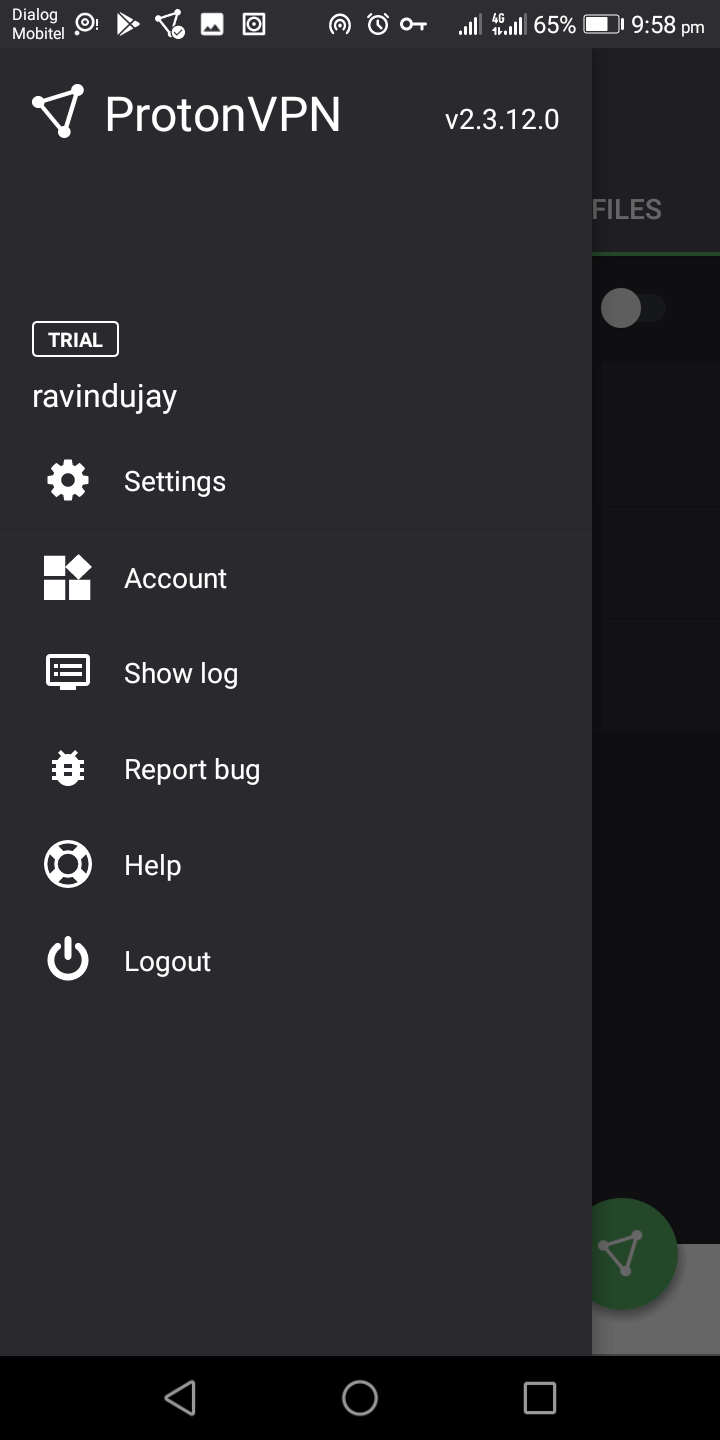 Head over to ProtonVPN’s Support Center if you have any questions regarding the application. You’ll find answers to frequently answered questions from several categories: 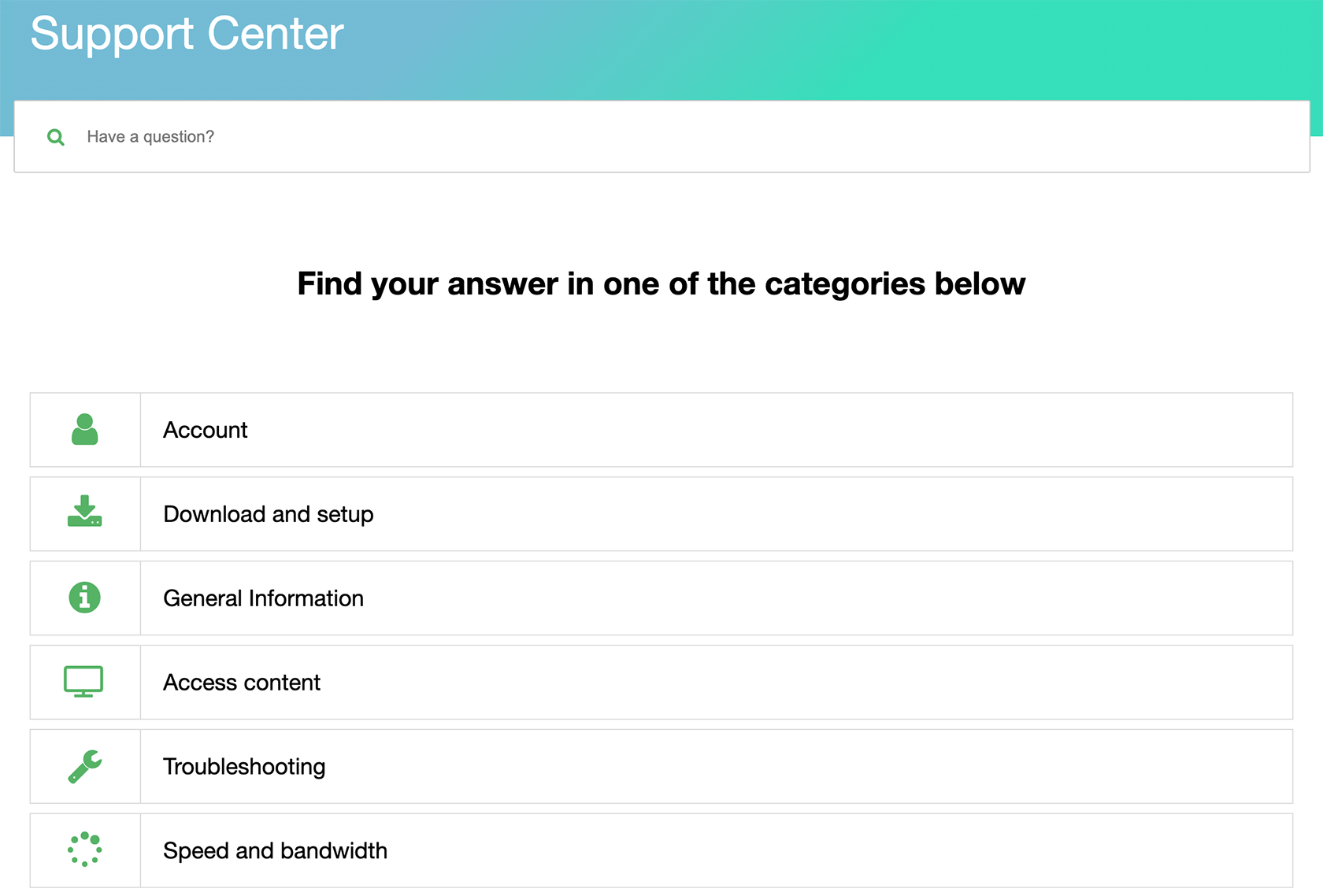 If the answer you’re looking for isn’t available, just click on the “Contact Our Support Team” button at the bottom of the Support Center page. Then you can fill out a form to describe your issue in detail: 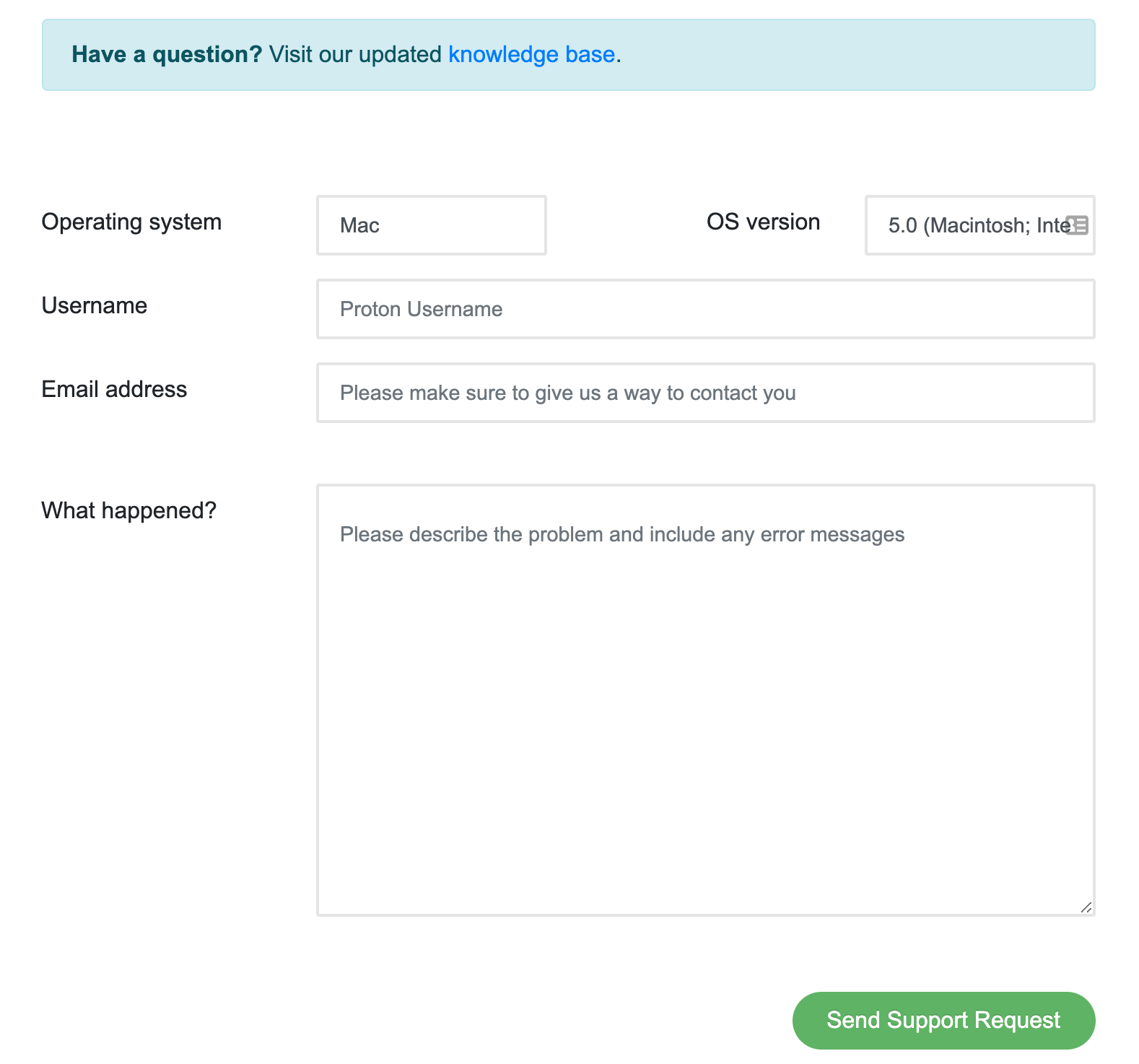 This is the fastest way for you to get a response. You can also email ProtonVPN at [email protected], or Tweet @ProtonVPN. Unfortunately, live chat isn’t available.

As mentioned, there’s a 30-day money-back guarantee for your peace of mind, in case you find that ProtonVPN really isn’t for you.

Verdict: ProtonVPN is one of the most secure VPNs I’ve seen. Their encryption is top-notch, and their policies fully support user privacy.

ProtonVPN promises to use only the strongest encryption mechanisms for securing an internet connection:

The encryption cipher suites include only ones with Perfect Forward Secrecy. What this means is that no one can capture your encrypted traffic and decrypt it later using a compromised key from a previous session. A new encryption key is generated at every connection, and it can’t be used again in another session.

ProtonVPN uses strong secure protocols: IKEv2/IPSec and OpenVPN. Some of the low operational costs involved in protocols such as PPTP and L2TP/IPSec aren’t in ProtonVPN servers.

As the ProtonVPN vendor is based in Switzerland, Swiss law prohibits the company from saving user connection logs. Moreover, they can’t be forced to perform targeted logging on specific users. Therefore, your browsing activity will stay private, and no third-party applications can read them. This no-log policy applies to all users, even including those using ProtonVPN’s free version. 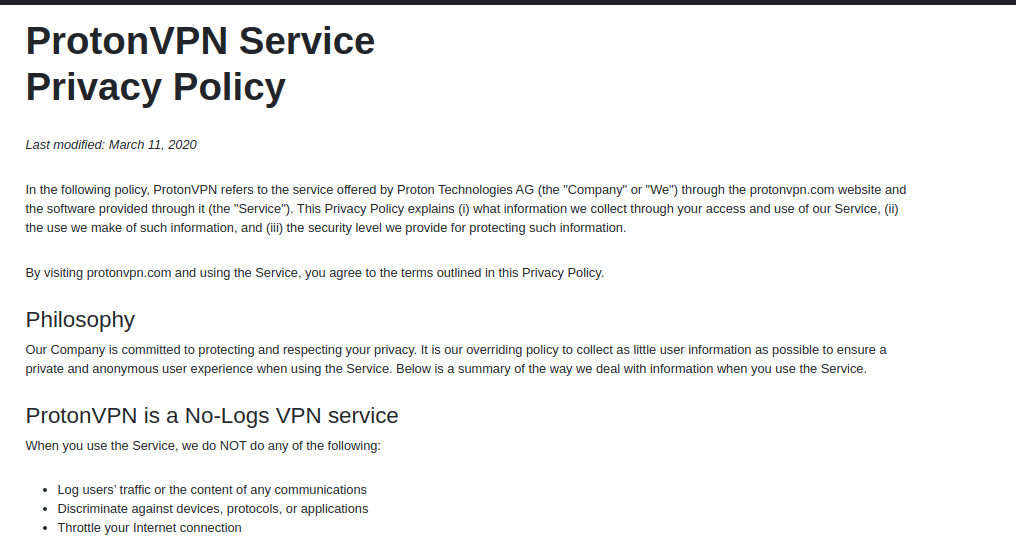 However, for the purpose of securing your account and to authenticate the user, ProtonVPN does store the timestamp of the user’s most recent login. But the location of signing in and the duration of the logged-in state aren’t stored.

Let’s go through some of ProtonVPN’s interesting features!

What’s a kill switch, you ask? A kill switch makes sure your internet traffic always goes through the VPN. And if for any reason a VPN failure occurs, the kill switch cuts off your internet connection, protecting you from any threats and vulnerabilities.

There’s a built-in kill switch in ProtonVPN. It’s an always-on feature in the mobile application that automatically re-establishes the connection with the VPN server and prevents you from revealing your IP address.

In a peer-to-peer (P2P) computer network protocol, peers are the computers connected to each other using the internet. It allows users to directly share files among the systems, with no central server required. The structure of this network makes it efficient to download large files.

Torrents use peer-to-peer software. Considering that many people use VPNs for torrenting, it’s essential to have servers that support P2P.

Not all the servers in ProtonVPN support P2P. Therefore, make sure to select one that has this facility. You can see if the server supports P2P using the icon with two arrows pointing in opposite directions:

Iceland, Netherlands, Singapore, and Switzerland are some of the countries with servers that support P2P facilities.

Another special feature in ProtonVPN is the built-in Tor support. The Tor anonymity network can obtain access to sites on the dark web by routing your traffic through it with the VPN servers that support Tor even in ProtonVPN.

You can identify servers that support Tor using the Onion icon next to the country name.

Simultaneous connections are allowed in paid versions of the application, starting from two devices up to ten. The Basic plan includes two connections; the Plus plan, five connections; and the Visionary plan, ten connections.

Also, for longtime paying customers, ProtonVPN offers two extra connections for free as a thank you.

Getting Started With ProtonVPN

If you decide that ProtonVPN is right for you, here’s a quick guide to help you get started.

Signing up with ProtonVPN is easy, and these steps are a must even if you intend to use it free of charge. To create your free account, do the following:

1. Go to ProtonVPN’s official site and click the “Signup” button. 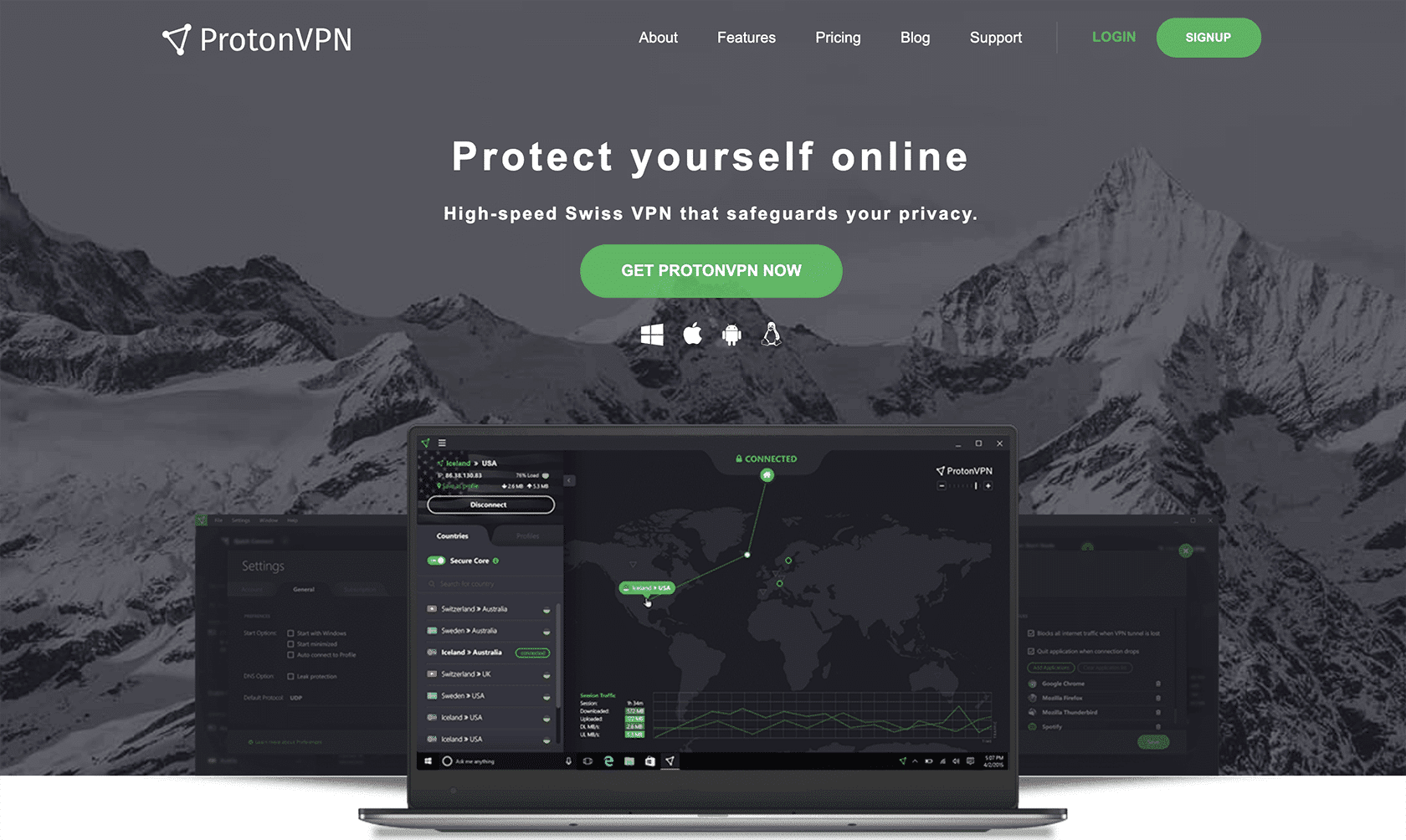 4. You’ll receive a confirmation code via email or phone to verify your account.

5. Verify your account by entering the verification code sent to you.

6. Then you’ll be directed to the Downloads page. Select your operating system.

As of the time of writing this article, there are 51 countries and 954 servers under ProtonVPN. It can support up to ten devices, including mobile phones and routers, depending on the subscription you purchase.

For Windows or Mac, installation is a breeze. First, you’ll need to create an account by providing an email address and username. Then select your operating system.

Then follow the prompts. Everything’s wonderfully straightforward. For example, if you’re a Mac user, this should look very familiar to you: 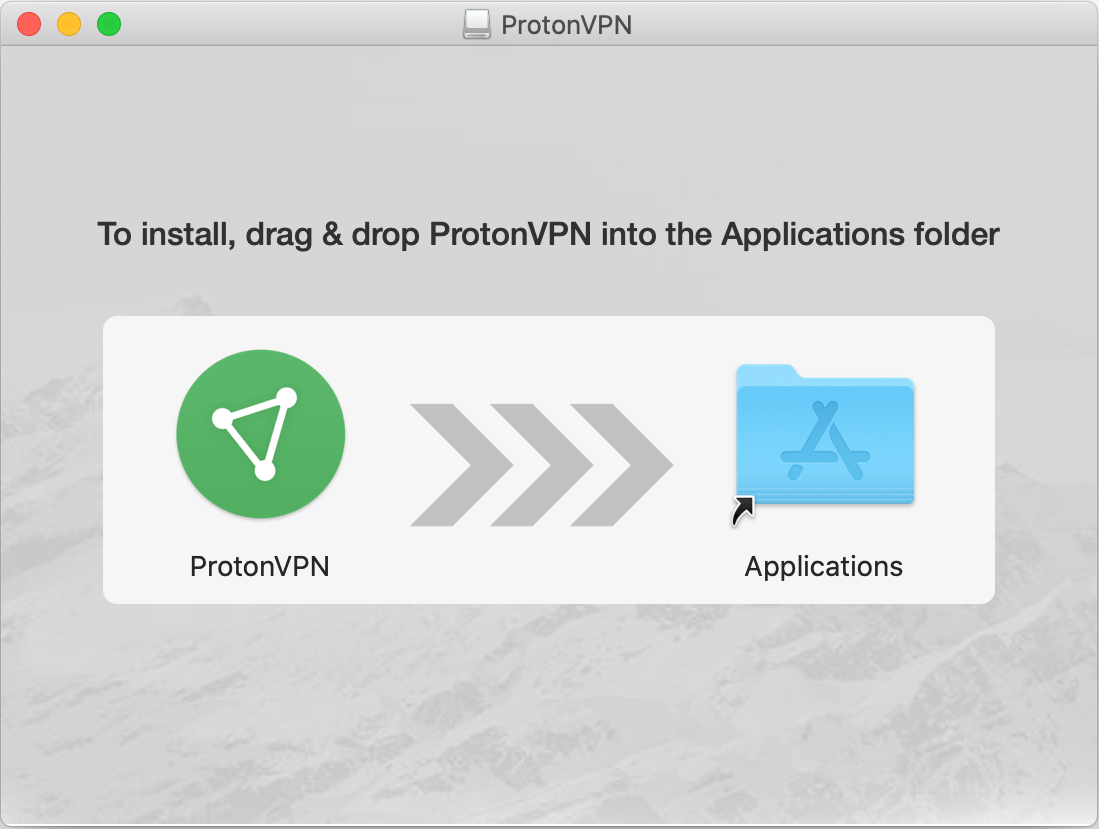 Make sure you’ve installed the latest versions of the following dependencies:

Then enter the following commands on your terminal:

After installing the client, you have to proceed with the initialization process to connect your ProtonVPN profile to a VPN server.

Then you’re all set!

All in all, ProtonVPN is a great choice for those who need to add privacy to their internet connection. If you want to use the application on just one device, the free option should be fine for you.

Unfortunately at the time of this review, we were unable to access Netflix or BBC iPlayer through ProtonVPN.