The hackers who claim to have breached US trading platform Robinhood today revealed that they are ready to sell the stolen data of millions of customers worldwide.

The hackers are accusing Robinhood of lying and for intentionally omitting that ID card data was exposed.

A Robinhood spokesperson confirmed to Privacy Affairs that some identification images were exposed but added that this happened in less than 10 cases.

On Monday, Robinhood announced in a blog post that on the evening of November 3, it experienced a severe security breach. An unauthorized third party managed to gain access to the trading platform’s customer support systems.

The blog post explains that the unauthorized party managed to obtain a list of email addresses of approximately 5 million people and the full names of a different group of approximately 2 million more individuals.

Furthermore, in the case of approximately 310 individuals, additional personal information and details were exposed, including names, dates of birth, and zip codes.

Robinhood explained that the hackers attempted to extort the company, but law enforcement was instead notified and that an investigation is currently ongoing.

Today, the alleged hackers have responded to Robinhood’s blog post on a popular dark web hacker forum and accused the company of lying and downplaying the severity of the breach. 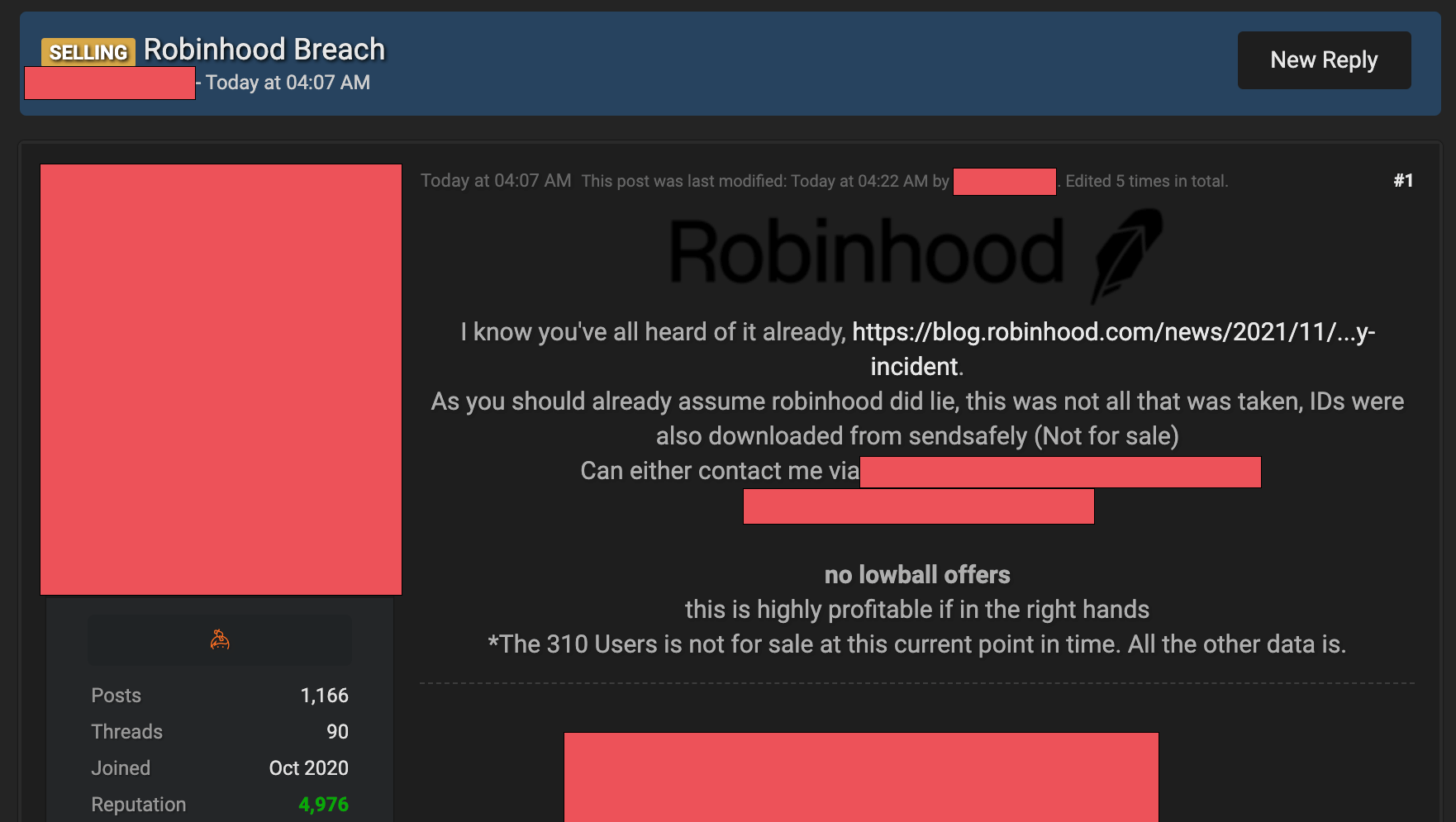 The forum poster in question is a senior member and prolific seller with a high reputation.

The hackers claim they are ready to sell the stolen data to interested parties and are not accepting any “low-ball offers.”

They claim that the data could be “highly profitable in the right hands”.

Allegedly the data on the 310 Robinhood customers that includes “additional personal information” is not for sale at the present moment.

Privacy Affairs made Robinhood aware of the sale announcement and the claim that ID cards were also exposed.

A Robinhood spokesperson explained to Privacy Affairs that some ID cards were exposed, affecting less than 10 individuals.

A Robinhood spokesperson told us via email: “As we disclosed on November 8, we experienced a data security incident, and a subset of approximately 10 customers had more extensive personal information and account details. These more extensive account details included identification images for some of those 10 people. Like other financial services companies, we collect and retain identification images for some customers as part of our regulatory-required Know Your Customer checks.”

Initially, Robinhood did not disclose the information. Even ID card scans were affected and then only vaguely stated that “more extensive account details” were revealed for 10 customers.