Go to NordVPN Instead

FreeVPN.me is a low-quality VPN that comes with extremely slow speeds and questionable privacy features. You should use a real VPN like NordVPN instead. Don’t waste your time with a bad VPN service.

If someone offers a VPN for free, you should know there is a huge issue related to the quality of that VPN. It’s not possible to provide a good VPN service freely as it requires a lot of powerful servers.

FreeVPN.me claims that they offer the same experience paid VPNs offer free of charge. You will realize that this is a huge lie the moment you land on their website and try to install the app. The owners of this app claim that they love privacy and net neutrality. However, they hide their identity from their users, which brings suspicion to us about their motives.

The following details will give you a clear idea on actually how good or bad this VPN is for your tasks.

It will be very difficult for you to find a good review regarding this VPN on the internet. Having used it for two weeks, we have to say the same thing. We can’t recommend it to anyone due to its poor security and privacy, very limited number of servers, unreliable speed, and ineffective customer service.

In terms of security and privacy, they use AES-256 encryption and claim to have a no-logging policy. However, despite their claims, there’s a vulnerability of exposing your IP. They require a high cost to maintain their service regardless of how poor it is. How do you think they earn that much money unless by selling their client data? Furthermore, their speed deviates highly after connecting to it with different locations.

Another disappointing fact about this VPN is its lack of servers. FreeVPN.me does not reveal how many servers they possess. Their official website shows only one connecting server and its location. This clearly shows their lack of visibility by not providing users a clear idea on their coverage.

Moreover, probably FreeVPN.me has the worst customer service. You will have to wait a long time to get a reply from them via email, or you will not be able to contact them at all for any urgent matter.

Go through the following review to find out more on why you should refrain from using this free VPN.

The official website of FreeVPN.me boasts that they offer a ‘Blazing Fast’ server speed with over 10Gbit/s of dedicated network cloud capacity. Furthermore, they claim that you will get the best possible speed without any bandwidth restrictions, no matter how high your network usage is. This statement can be misleading as their website shows that there is only one available server.

Speed Test using OpenVPN with both TCP and UDP protocols

The below figure shows my normal internet connection speed before connecting to the VPN server. We will also make a note of upload and download speeds in these different scenarios.

After connecting to the VPN with server1 on TCP port 443 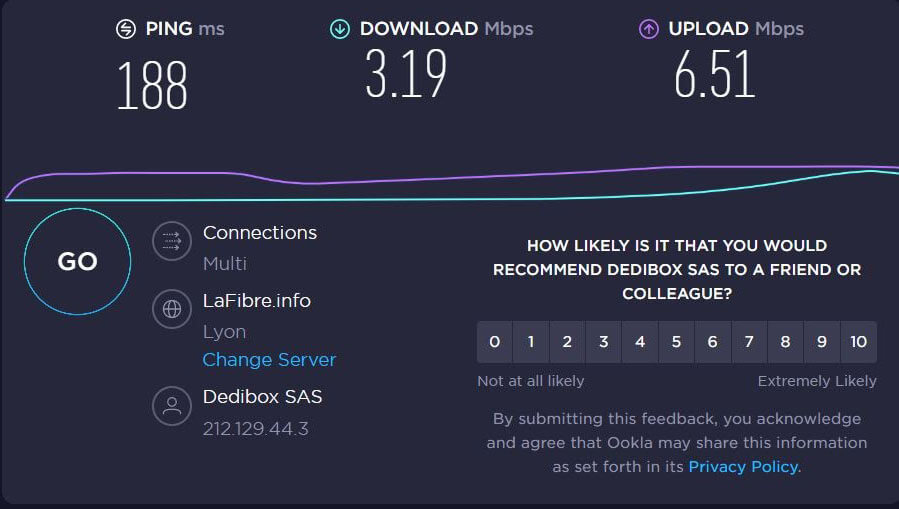 After connecting to the VPN with server1 on TCP port 80: 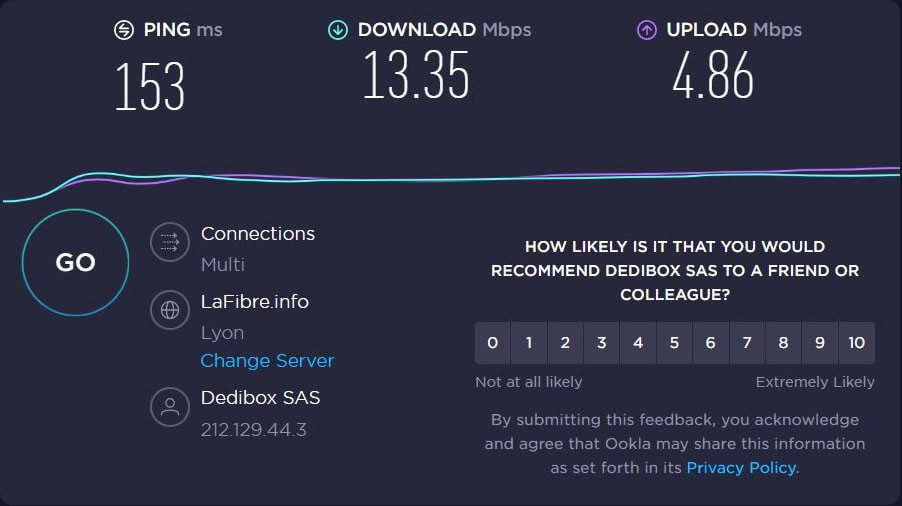 After connecting to the VPN with server1 on UDP port 53: 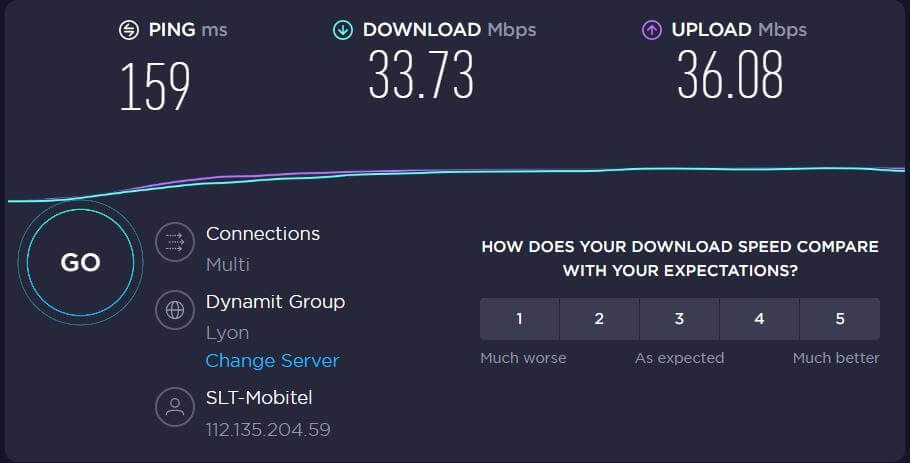 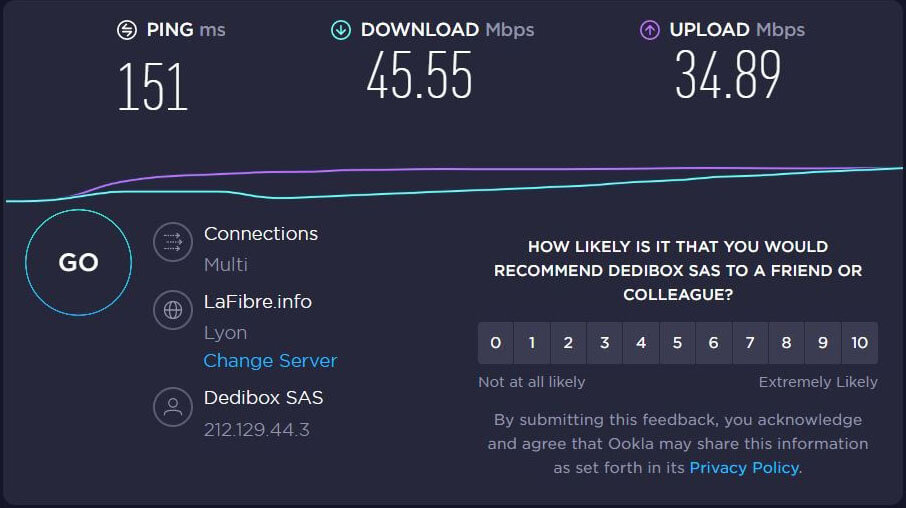 According to this test, there is a drastic difference in the speed when connected with TCP than the regular speed. However, the speed is much better when connecting to UDP, especially from UDP 40000. How about the speed at different locations? Lets’ perform another speed test on speedtest.net from the following locations connecting to the VPN server with UDP protocols.

As you can notice in the following figure, there is a great deviation of upload and download speeds even for the fastest connection with UDP, especially in lower download speeds. Thus, speed is not something we can guarantee with this VPN.

One thing to note here is that a good VPN will provide an option in their application to perform a speed test and allow users to choose the server that yields the best speed for them. However, freeVPN.me doesn’t offer a direct option to do so.

Significantly, there is no statement about the number of servers FreeVPN.me has and their locations, while usually, almost every VPN service declares how many servers they have. It is mentioned in some recent reviews that they have seven servers located in 4 countries as France, Germany, Poland, and Amsterdam. Normally, for a VPN to cater to user needs, it should have more servers covering all the locations as much as possible..

Furthermore, as discovered from past reviews, FreeVPN.me has had seven domains corresponding to the servers they had, but now all of them are redirecting to their website. Maybe all the other servers are unavailable by now, or they might have been removed due to the low usage.

Since there is no official statement regarding this, we don’t know exactly how many servers they have currently, and only the following server is listed on their website.

Like many other VPNs on the market, FreeVPN.me also includes no logging policy since their servers are said to be located in off-shore sites that do not require keeping logs. However, they do not specifically mention what kind of data they are not keeping. Thus, again making their security policies vague in terms of clarity.

Although they provide a decent level of privacy through this no-logging policy, your real identity can still be leaked when using it. For instance, when doing the speed test, it showed up my real IP address with the name of my Internet service provider several times, as depicted in the following figure.

Hence their ability to actually hide the real identity of users is questionable. Also, some users had complained that their real IP was exposed when they performed a test at dnsleaktest.com.

Besides that, many users have commented that this VPN cannot be used to stream Netflix in some countries. When trying to stream Netflix, our experience proved that statement true as Netflix was able to identify that it was accessed through a VPN. Hence, there is no evidence that this VPN supports bypassing geo-blocks when using any streaming services.

So if you want to access the restricted content on Netflix or any other streaming service, freeVPN.me is not the right choice for you.

FreeVPN.me uses strong AES-256 encryption, which is practically unbreakable and the most recommended encryption standard. They also offer PPTP VPN and TCP and UDP protocols with OpenVPN to implement security mechanisms for data privacy and protection.

However, they do specifically mention the following statement on their website. “Any form of spamming, fraud, attacks, and hacking are not protected by our privacy policy.”

While there is a general concern that VPNs do not provide this level of security, there are a lot of VPNs that offer additional protection from hackers.

Also, the fact that FreeVPN.me is free can be used to lure you into downloading malware by visiting sites. Therefore, if you need this extra level of protection, go for a better, trusted, and reputed VPN like ExpressVPN that provides kill switches and malware blockers.

There is no dedicated VPN client, a desktop, or an android application for using freeVPN.me, and you will have to use an open-source VPN client like OpenVPN. Therefore, it will take some time to download, install, and configure the VPN client and finally connect to the VPN server.

Unlike many VPN services, they do not provide any instructions or guidelines to follow when using it. Therefore, if you are a novice VPN user, it would be difficult for you to understand where to start.

FreeVPN.me supports all PCs, Apple, and Android devices. However, connecting to this VPN on a mobile phone is really annoying. There is no direct way to import the profiles using the OpenVPN application, and you will have to import them manually.

For example, in IOS mobile, you have to either import the profiles using the iTunes store or send them through an email application. Therefore, it lacks one of the essential features of a VPN service, user-friendliness, which attracts more users.

Since there is no dedicated application for freeVPN.me, you cannot expect useful functionalities such as split tunneling or embedded speed testing through it, which are offered by many other good VPNs in their free versions. Thus, this VPN is a huge failure in this area.

The only way to contact the staff of freeVPN.me is through an online form on their official website. There is no email address, phone no or anything that can be used to contact them directly.
Besides, you cannot guarantee when you will receive a reply to your inquiry. For example, we have sent a question to them but haven’t replied yet. 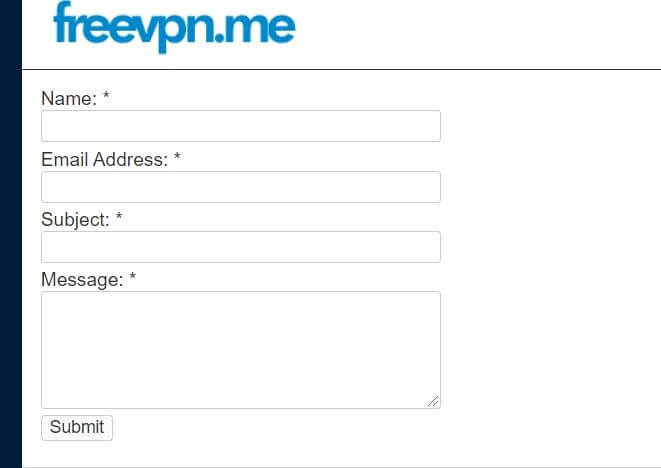 You can try to find the answer to your question at least through their FAQs. You are lucky if your question is listed there. However, their FAQs and the blog are not that rich, and they have only provided answers to very basic questions like ‘what is a VPN server,’ which you can easily find in Wikipedia.

What about live chats? Obviously, there are no live chats. Usually, a good VPN service offers 24/7 live chat support for their consumers to contact them for any urgent matter.

Due to all the above reasons, it’s correct to say that their customer support is non-existent!

Since this VPN is absolutely free, there are no plans or packages, unlike many other VPNs that offer both options. They provide three accounts to choose from as OpenVPN, L2TP, and PPTP. When something is provided at no cost, you should be extremely careful about that product or service. FreeVPN.me is no exception to this rule.

It could mean that they are making profits in some other ways. For example, according to Norton, free VPNs mostly rely on advertising to make a profit. Advertisements that may include third-party trackers can be injected into your browser, and the VPN may be selling your browsing data to them for marketing purposes. They could even slow down your internet speed. These vulnerabilities also apply to this free VPN. So, it is advisable to use a VPN that offers premium plans as well.

Additionally, you can choose to donate to keep the service alive and free. However, it’s obvious that people would not donate money to compromise their privacy and would rather go for a better VPN with that money.

How to get a New York VPN.