According to Statista, in 2020, around 3.6 billion people used some form of social media. A graph by Statista, representing the trajectory of growth for social media, shows usage will increase to over 4.4 billion souls by 2025. By current projections, we are already at almost half of the world’s population using a social media platform.

Everyone reading this will no doubt realize that social media is not designed for the good of humankind. The platforms generate massive revenue for their owners; Instagram and Facebook together booked $70 billion in ad revenue in 2019.

Because of the lucrative nature of billions of users interacting with Social media, this technology has been the success story of the tech industry. Surely, there is nothing to dislike? These platforms designed for social interaction have opened communication channels worldwide and brought friends and families together. It’s a wonder of modern times…or is it?

As a long-term user of social media, I believe that the time is now to switch it off for the good of humankind. This is why…

The Social Side of Humans

Human beings evolved to be social animals. There is a good reason for this; it helps us reproduce. Traits, such as patterns of behavior, mating systems, and even eye color, are selected because they lead to more offspring or at least help a group of animals to live successfully in each environment.

The theory behind evolution is complicated and has several underlying mechanisms. There are also several competing mechanistic theories too. But one thing is sure, how we behave as human beings have deep roots, and those roots follow us into the digital realm.

There are a lot of humans on the planet. Humans have developed the notion of “society” that is (generally) hierarchical as a species. This hierarchy was because of the Neolithic Revolution, where human society changed from a nomadic hunter-gather to a more settled, agrarian way of life.

Long story short, humans had to adapt because of climate change. With that adaptation came the kind of societies we see today: specialized labor, chiefdoms (hierarchical structures), and population increases. To maintain a degree of control as populations grew, people moved closer together into towns and eventually cities, and as those hierarchies became more structured, complex social norms evolved.

Social norms are unwritten rules. They may have cultural overlays, but there is a general set of behavioral expectations. You see these reflected in religious texts, “thou shalt not kill,” for example. They are a vital mechanism to keep humans from behaving badly and causing each other harm.

People love conspiracies and “tall tales,” fake news, as the deep and long-seated affection for mythology and folklore the world over attests. But social media has broken these key elements of human society. For example, social media has elevated storytelling to new heights. Social media, however, is the source of more harm than simply pushing fake news into our timelines: Social media has a disregard and disrespect for our privacy.

The Bad, Bad, and Ugly of Social Media

This smashing of social norms, including the disregard for privacy, has increased users’ anxiety. Anxiety and social media seem intrinsically paired. A study exploring the application of machine learning to determine anxiety status from tweets says: “Social media users seem to view their online profiles as an extension of the self, rather than a separate entity” . This is an important statement.

The social aspect of these platforms means that humans treat them as an extension of a verbal communication system. This means that those societal norms, the ones we have developed over millennia to keep society ticking along nicely, must be reflected on social media platforms too. But they are not because social media fails at the level of trust.

Social media platforms are all about relationships. You create groups that follow and follow you back, reveal aspects of your life as others reveal, and so on. An important aspect of any relationship, on or offline, is trust. But trust is broken by disregarding social platforms for individual privacy.

This is evidenced in a 2019 report “CIGI-Ipsos Global Survey on Internet Security and Trust”. The report presents some shocking findings:

“Social media companies were second only to cyber criminals when it came to fueling online distrust.”

And this feeling is only getting worse:

“53% of those concerned about their online privacy say they’re more concerned than they were a year ago.”

Social platforms, because of their lack of respect for privacy and the intrusive nature of the media, are ignoring evolved societal norms. The consequences are reflected in a slow but steady exodus from the platforms.

However, the resultant outcry saw large numbers of users downloading alternative apps, like Signal, to the point where Signal’s servers crashed. WhatsApp has now delayed the new policy until May.

If this is not a sensitive indicator of the importance of privacy to users, I do not know what is.

A few big names have left the social platforms too. In late 2020, in a bold move, fashion house, Bottega Veneta left Instagram, Facebook, and Twitter. In 2018, Elon Musk removed the company Facebook accounts for Tesla and SpaceX saying that Facebook’s use of data gave him “the willy’s”.

The loss of big names like Tesla and Bottega Veneta may hurt social media more than the departure of individual users, initially, as they buy ads. Still, users are ultimately the meat on the bone of social media collateral.

The departure from social media platforms is one to watch; connecting with friends and family is a strong draw, but we were able to do that before social media, and we would find a way to do it again.

Aspects of online privacy and the Venn diagram of Trust 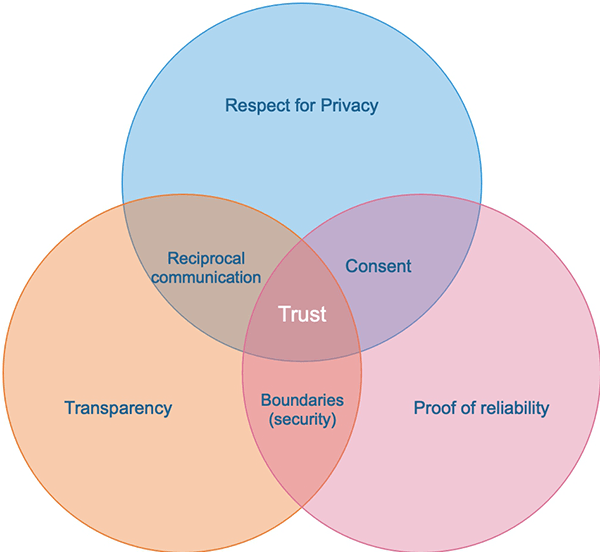 Is Social Media an Inevitable Part of Human Cultural Evolution?

Some might argue that social media gives humans that use it an evolutionary advantage. Perhaps the platforms make finding mates easier or allow money to be made to buy food, shelter, etc. From an evolutionary perspective, on the surface, this may seem plausible.

But any platform that causes its users anxiety, where users are waiting for an excuse to leave (in favor of an option that respects their privacy), is bound to fail.

Social media removes barriers to communication, but it also removes obstacles to the privacy of our data and our lives; this is not a good thing. Social norms are there for a reason, and privacy is part of the normal working of society, there to protect us from outside threats.

Remove privacy in the real or digital world, and consequences occur. Perhaps social media will resolve the privacy/marketing conundrum and allow humans to revel in open communications truly. Still, care must be taken in developing a way to mimic behavioral norms and expectations. If not, time will weed out the platforms that show disregard for these norms, including the individual’s privacy.

Susan is an ex-chemist who transitioned to the IT-security sector in the early 1990s where she became a founder of a cybersecurity start-up. Since then, she has built a knowledgebase across diverse areas including encryption, digital rights management, digital signatures, privacy, and online identity.

Susan has been involved in identity projects addressing government, enterprise, and consumer needs. She has helped design and commercialize award-winning software solutions used by organizations of all sizes, worldwide.

Currently, Susan works as Head of R&D at Avoco Identity who specialize in data orchestration solutions to facilitate the identity ecosystem.

Susan is also a tech writer and has a regular blog about digital identity at CSOOnline:

In 2020, Susan was shortlisted for a top 100 Women in Tech award and included in the long list of the most influential women in technology in the UK by Computer Weekly magazine.

Her mantra is design for a digital life, not just digital identity.