How to bypass FortiGuard Web Filtering

FortiGuard Web Filtering was developed by Fortinet, a web filtering software used by schools and businesses to block access to various websites through a URL filter.

If you want to get started right away, follow these instructions to bypass FortiGuard web filtering in about five minutes:

Important: You will have to use the ExpressVPN Chrome or FireFox extension (after you have created an account, you will be able to download the extensions from the site) to unblock FortiGuard web filter. FortiGuard will not allow you to install any VPN apps on your computer, but you can still add browser extensions.

You may have to connect to several different servers before it unblocks FortiGuard, as many VPN servers and IPs are blocked. Also, remember to install the browser extension and not the app itself, as otherwise, it will not work.
VPN method not working no matter what? – You can find a few alternative methods here.

If you want to learn more about what a VPN actually does and how it works, please check out this article.

What is FortiGuard Web Filtering?

Fortinet developed FortiGuard Web Filtering, a web filtering software used by schools and businesses to block access to various websites through a URL filter. It could be that school or business administrators want to filter out inappropriate, offensive, or illegal content; or prevent media streaming sites from using too much bandwidth and slowing down the network.

FortiGuard is particularly effective because it uses both hardware and software controls to block content. It’s especially effective at preventing malware downloads from malicious or hacked websites. 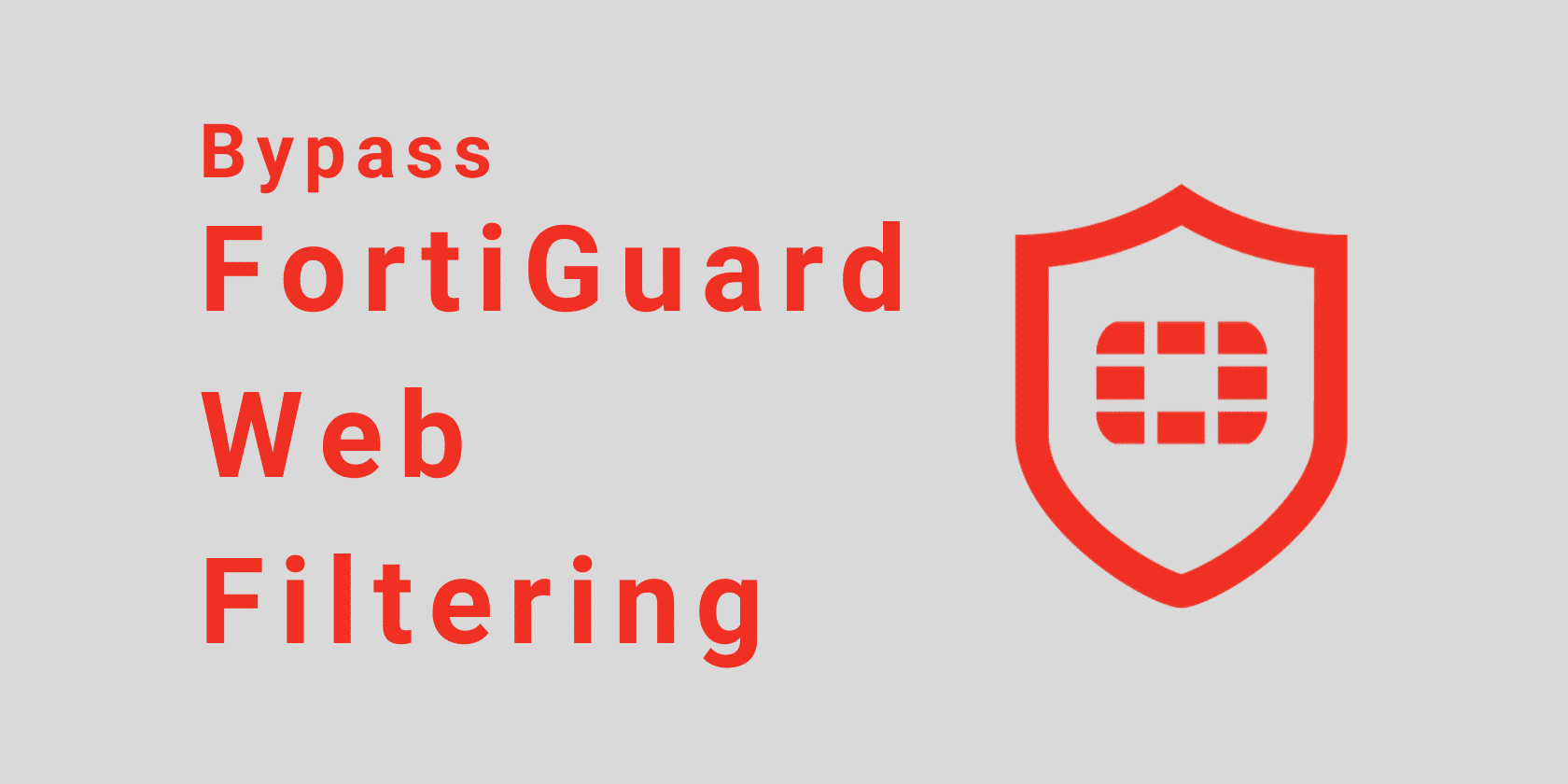 Why Does My Network Block Certain Websites?

Probably so you can stay productive. When you’re studying or working, your teacher or business manager doesn’t want you to be distracted by social media feeds, live-streamed sports, or shopping sites.

Nor do IT administrators want you to infect their systems with malware you inadvertently downloaded. Hence, it shouldn’t be surprising for networks to use website-blocking tools like FortiGuard Web Filtering.

How Does FortiGuard Web Filtering Work?

Before getting to that, let’s discuss how a website might get blocked in the first place. There are numerous techniques, such as including that site’s address to the block list of a firewall (in this case, Fortigate Firewall) or disabling a router’s access to the website host server’s IP address.

FortiGuard Web Filtering uses DNS web filtering — employing DNS lookups to get webpage ratings that determine whether webpages will be blocked or redirected. DNS filtering services are available to manage the process.

They block access to malicious and risky websites, prevent the downloading of malware, and stop users from accessing content that could hamper productivity or cause offense. This technique contains simple tricks like entering a site’s IP address instead of its URL to bypass a block.

Any attempt to access a blocked site on a blocklist will result in the user receiving a message from FortiGuard indicating that access is blocked. Log files generated by the FortiGuard application record all access attempts.

FortiGuard Web Filtering will block particular websites. If you want to unblock them (for legitimate reasons, of course), you’ve got several techniques at your disposal:

Just request that the person is managing the FortiGuard Web Filtering tool grant access to the specific sites you need. Theoretically, this is the most straightforward technique; however, opening up the filtering such that dangerous websites are also made available may be impossible.

Please remember that techniques that don’t encrypt network traffic, like SmartDNS, won’t help if you try to enter a blocked website. You’ll be stopped dead in your tracks.

How to Bypass FortiGuard Web Filtering Using a VPN

To unblock your network and access blocked websites such as Facebook and SoundCloud, just install a VPN app on your device.

You’ll get a secure, encrypted tunnel between the VPN server and your device. Then your internet traffic data will be protected as it moves through the VPN tunnel.

Your encrypted connection will prevent the FortiGuard filter from detecting the sites you browse. From the filtering tool’s perspective, all your data will be nonsense. It won’t understand the kinds of places you visited.

One caveat: You might be breaching terms of use if you utilize a VPN to bypass FortiGuard content-filtering. This can result in certain disciplinary actions against you if you’re caught.

It can also increase the chance of inadvertently downloading viruses if you visit a dangerous site — so be careful. Visit only reputable websites and stay safe online.

What VPN Should I Use?

To get access to FortiGuard-blocked websites, ExpressVPN is our top recommendation for its exceptional privacy features and encryption.

First, download and install the VPN app. Generally, they’re painfully slow and will typically sell your info to advertisers and various organizations. You’ll want to avoid anything free.

Again, our recommendation would be ExpressVPN, one of the best VPNs around. Its high-speed servers will allow you to view YouTube HD videos, and you won’t notice any issues with buffering! Nor will you have latency problems if you want to have fun with some online games.

Once the VPN app is installed, please turn it on and select the country you prefer to connect to. For the best internet speed, it’s ideal for connecting to the closest server nearby, preferably in your own country.

This is the most surefire option if the only thing you want to do is unlock your network. It will be problematic if you want to see content that your country’s ISPs restrict.

After you’ve connected to your selected server, you’re free to visit all the websites you want to see.

ExpressVPN is also great for other use-cases such as getting YouTube unblocked or using it as a Disney Plus VPN.

Ugh, the Network Has a Block on VPNs. Now What??

FortiGuard Web Filtering may prevent VPN websites’ access and stop users from downloading and installing such software. If you don’t have VPN software pre-installed and access to the ExpressVPN website is blocked, you need a different solution.

In this case, you can install a browser add-on like the ExpressVPN Chrome or Firefox extension instead. This solution doesn’t provide the full functionality offered by the ExpressVPN app, but it will still give you excellent service with all the functions you’ll likely need.

This solution will also work if your computer is completely locked down and you can’t install applications without an admin username and password.

What If There’s a Block on VPN Traffic on the Network?

FortiGuard Web Filtering may detect and prevent encrypted traffic if it recognizes that it’s coming from a VPN. In this situation, you’ll want to utilize the “VPN obfuscation” capabilities of a Stealth VPN to make it seem like you’re not using a VPN. This is the best way to circumvent blocks to VPNs.

You might have heard about the Tor network and how it can route VPN traffic through several encrypted proxy layers. VPN-over-Tor is supported by only a relatively small number of VPN providers.

But if you availed, this technique would give you maximal unblocking power and privacy. However, setup can be complicated. Your internet speed would also become excruciatingly slow, and you’d have to say goodbye to your favorite games or video streams.

I Want to Use a VPN on My Network — But Will I Be Spotted?

Using a VPN won’t mean the network’s automatic monitoring systems will “catch” you. You need to be mindful of anyone too close for comfort over your shoulder.

The top VPNs like ExpressVPN are equipped with advanced encryption capabilities. Moreover, the crucial point is that they’ll store encryption keys on your device locally.

So with no physical access to your device, no one can detect the websites you enter — at least not without certain advanced technologies typically accessible only to governments.

This encryption is another reason why a VPN can bypass FortiGuard Web Filtering. Filters aren’t triggered because the content of data sent and received online is hidden.

If that doesn’t work and FortiGuard still prevents you from accessing the website you want to visit, you’ll need to find a server that works. Just trial-and-error multiple servers until you get lucky!

It’s not atypical for certain VPN IP addresses to be blocked by FortiGuard software. But you’ll find something that works eventually if you have patience.

How do you bypass FortiGuard Web Filtering?

How does FortiGuard Web Filtering work?

FortiGuard maintains a list of blocklisted websites, and every time you try to access those sites, it will prevent you from doing so in case FortiGuard is installed and enabled on your device or network.

How do you get rid of Fortinet?

If your school or work hardware uses FortiGuard, you can’t disable it without administrative level controls. You should use a different network or device instead.

How does FortiGuard web filter recognize a website worth blocking?

FortiGuard maintains a list of blocklisted websites that will get blocked if accessed.