Privacy Affairs is reader-supported. When you buy through links on our site, we may earn a commission. Learn more.

Best VPN for Craigslist and How to Overcome the VPN Ban

Craigslist often bans IP addresses and VPNs because of many fraudulent listings using such IPs. But it’s possible to overcome this ban by using a VPN for Craigslist that frequently adds new IP addresses.

In this article, I will show you how to unblock Craigslist and bypass Craigslist’s VPN ban.

Our testing showed ExpressVPN has the highest success rate regarding working IPs with Craigslist – , but it’s very important to remember that not all IPs and severs will work! You may need to try multiple ones before you find one that works.

Read our ExpressVPN review if you need more info about this VPN before trying it out.

You can also check out our general VPN guide first.

Below you can find a detailed overview of how and why VPNs may not work with Craigslist and how to overcome this. 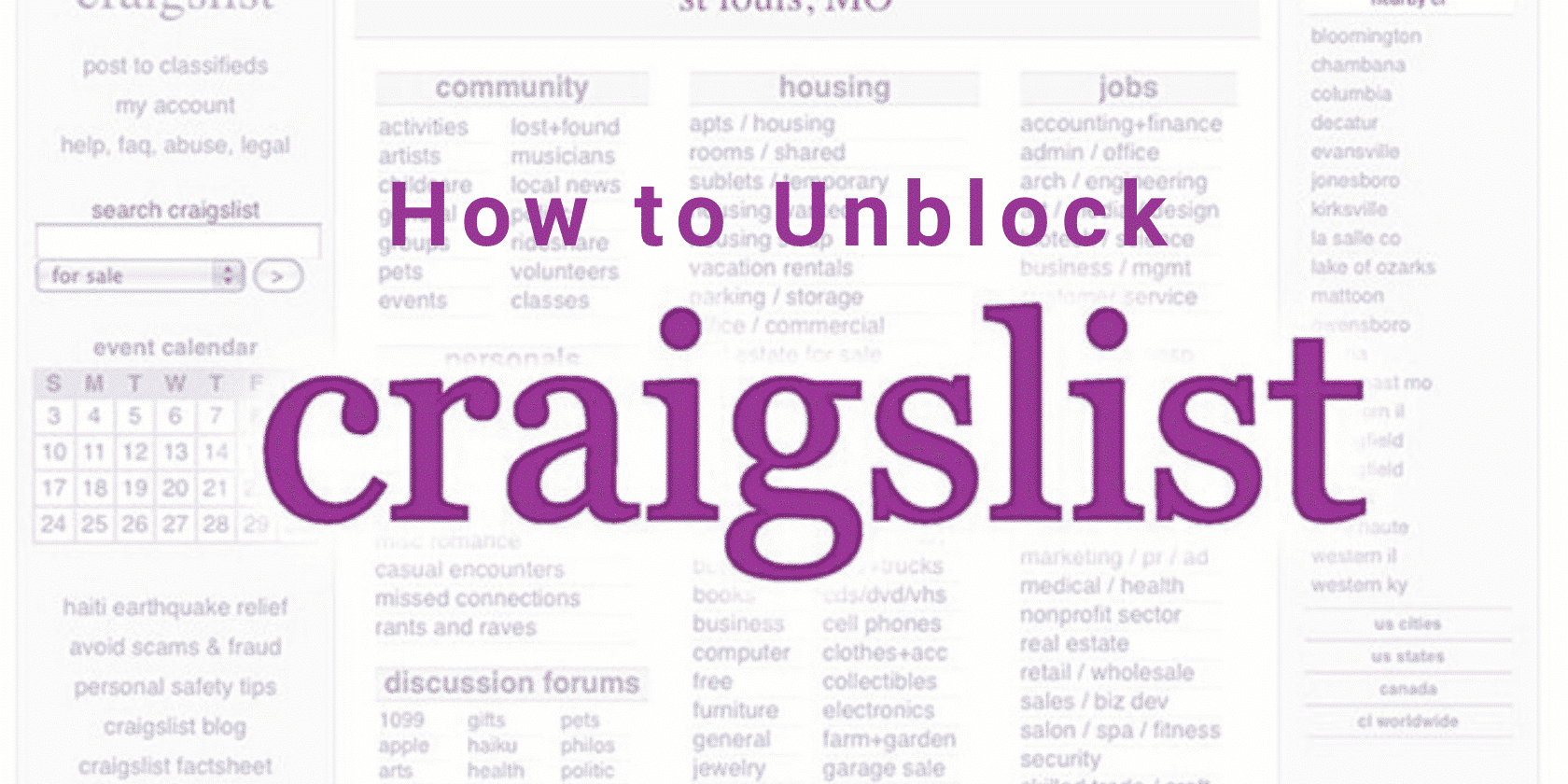 Why Do I Need a VPN to Access Craigslist?

Craigslist provides free, local advertising of goods and services within the community. Users can post ads on localized Craigslist pages for face-to-face exchange and payment.

Based in California and created initially for users in the U.S., Craigslist has expanded its reach to provide access to many parts of the world. It’s an excellent resource for finding a new job, looking for a service, buying and selling stuff, and more.

However, Craigslist comes with restrictions. Users can post in only one category and one geographical area once every 48 hours. Posting too often or having lots of similar ads will result in their removal.

Craigslist IP blocked? Thousands of users get their IP addresses blocked by Craigslist each day, usually because of spamming the site with too many ads or posting ads in different areas.

The IP address block will prevent the user from being able to access Craigslist. However, it’s easy to get around this problem with a VPN. Connecting to a VPN server in another country will give you a new IP address and hide your location.

In today’s global marketplace, there seems to be no reason why users shouldn’t be allowed to post ads on Craigslist outside of their local area. As a route to market, it can significantly increase efficiency and the probability of finding new customers.

Craigslist is also currently available only in around 70 countries. If you’re traveling abroad, you may end up in a country that won’t allow you to log in and see how your ads are doing.

Connecting to a VPN server in a country where Craigslist is available will allow you access.

If you’re at work or school and are supposed to be doing something productive, the last thing that your boss or professor wants is for you to be browsing sites like Craigslist, which they think will keep you from getting your work or school responsibilities done.

They also don’t want you wasting network resources or potentially infecting their systems with malware because of something you downloaded but shouldn’t have.

To be sure, those teachers, business managers, and IT administrators have the best intentions. But sometimes, you may have a legitimate, pressing need to visit Craigslist.

And it won’t hurt anyone! You intend to be careful not to allow offensive content or malware-laden files to wreak havoc on your network.

So, next up, we’ll move forward with how to bypass the Craigslist IP block.

How Can I Unblock Craigslist?

If you need Craigslist for legitimate reasons, like posting a recruitment ad or finding a local service, you can bypass network blocks on the website.

For most of these options to work, network traffic must be encrypted. Otherwise, it’s very easy to detect whenever someone tries to visit Craigslist, and that attempt will be blocked.

What is the Best VPN for Craigslist?

For its outstanding privacy features and most especially its sophisticated encryption, go for ExpressVPN, which is one of the best VPNs around.

ExpressVPN is also able to unblock Netflix and it has dedicated IPs as well. It’s available on iPhone, Android, and desktop. It has a kill switch and various other security features.

A free VPN is unreliable when accessing Craigslist because these VPNs have few IP addresses available. Craigslist is proactive in blocking VPNs, so these IP addresses won’t work for very long before being identified and blocked.

You need a paid service for a good Craigslist VPN.

Unblocking Craigslist With a VPN

If you’ve settled on the VPN method to unblock Craigslist, your first step is to find a VPN app! Again, we recommend a premium service like ExpressVPN for its extremely fast servers. You’ll get superior speed (no buffering issues!) and exceptional customer support.

Next, you have to install your chosen Craigslist VPN onto your device. Then open up the app and select the country to whose server you want to connect. For the fastest internet speed, opt for a server housed in the country you’re currently in.

But if you also want to access restricted content in your country, you’ll need to pick a server located in a different one.

What Happens If Craigslist Blocks My VPN?

When you connect to a VPN server, you’re assigned an IP address shared by hundreds of other users of that VPN server. There’s a small chance that one of the other users may also be accessing Craigslist — but in a malicious manner that causes that IP address to get blocked.

Fortunately, ExpressVPN has thousands of IP addresses available so that you can connect to a different server. This feature enables you to carry on and use Craigslist as usual.

Also, an advantage of using a premium VPN service like ExpressVPN instead of a free proxy or VPN service is that you’re much less likely to share an IP address with a malicious user.

Got Connection Problems? Here’s How to Troubleshoot

Still unlucky? Sometimes VPN IP addresses get blocked, which is not uncommon. In this case, try connecting to different servers. Eventually, you’ll stumble on one that works. All it takes is a little patience!

You can use a VPN for several other things as well such as having YouTube unblocked or watching the BBC iPlayer from the USA. A VPN also works with unblocking Hulu.

How do I unblock my IP ban on Craigslist?

Can Craigslist block you for using a VPN?

What do I do if my Craigslist account is blocked?

What to do when you see ‘this post is being blocked’ on Craigslist?

You will see this warning if you have violated Craigslist Terms of Use. Also, this might happen if Craigslist has shadow-banned your account. With a shadow ban, other users might not see the ads you post. Again, the workaround is to register for a new account using a different IP address.

How to stop being blocked on Craigslist?

You should not violate Craigslist Terms of Use to avoid blocks and bans. If you need to post many ads, be smart about it. Don’t spam similar ads or post many ads in a single instance. Alternatively, you can register for other accounts but use different IP addresses. It would help if you used a reputable VPN with a dedicated IP address or a premium residential proxy.