How to unblock Hulu in less than 5 minutes:

Depending on what you count as a streaming site, Hulu is either the second or third most popular streaming service in the United States (after Netflix and YouTube). It provides streamed content from the US television networks NBC, FOX, and ABC, as well as producing original content such as ‘A Handmaid’s Tale’.

However, currently, you can only access Hulu from the United States, Japan, or a US military base located outside the country. If you try to access the site from outside the US, then it is likely that your access will be blocked.

Why can’t I access Hulu from outside the US?

If you try to access Hulu from outside of the US, without the right VPN in place, it is likely that you will be ‘geo-blocked’, and unable to access the site.

A common method of getting around such a restriction is to use an anonymising tool such as a proxy server, a Tor browser or a Virtual Private Network (‘VPN’).

However, it is possible that if you attempt to access the site using one of these anonymising tools, you may get the following message:

“Based on your IP address, we noticed you are trying to access Hulu through an anonymous proxy tool. Hulu is not currently available outside the US. If you’re in the US, you’ll need to disable your anonymizer to access videos on Hulu.”

In this article, we explain how it is still usually possible to access Hulu via a VPN. However, in order to avoid being blocked, it is recommended that you use a premium VPN service, such as ExpressVPN.

To unblock Hulu from outside the US, the best method is:

1. Choose a high-quality VPN service such as ExpressVPN.

2. Download the VPN application and consider adding a browser extension. 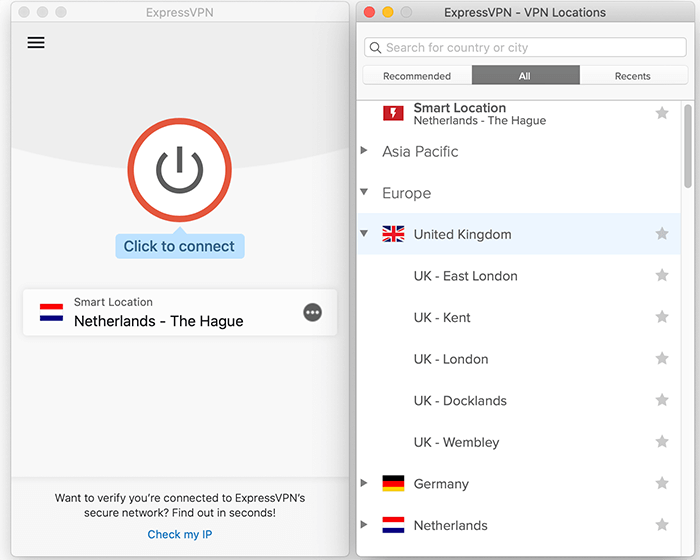 4. Go to Hulu, login, and try watching something. Note, if you have not signed up to Hulu, you will have to do so first before you can watch something.

Why isn’t Hulu available outside the United States and Japan?

In order to stream shows, Hulu must acquire the distribution license to screen that show. Currently, Hulu is not licensed to do so outside the US and Japan. While Hulu has signalled an intention of further international expansion, it has not yet explained when this will happen.

What is a VPN and how does it work?

A Virtual Private Network (‘VPN’) works as a kind of ‘middle man’ between you and the internet as a whole. Instead of connecting directly to your target site (in this case, Hulu.com), your communications are first encrypted and sent through a virtual ‘tunnel’ to a server owned by the VPN service company. It is this VPN server (and its IP address), which accesses the ‘public’ internet and goes to the site in question.

Most VPN services will let you choose where the server is based. Once you connect to a server in the Netherlands, for example, your device will automatically receive an IP originating in the Netherlands. To anyone else on the web, you will appear to live in the Netherlands, and any local geo-restricted services, based on IP address, become accessible to you.

By using a US-based VPN server, you may be able to access sites which are geo-restricted to US IP addresses only.

Recommended reading: What is a VPN and how does it work

Hulu is giving you the content-blocking message even with a VPN. What should you do?

This may happen where the IP address of the server you have connected to, is on a Hulu blacklist. As with many other streaming sites, Hulu actively monitors which users are accessing their databases, and sometimes blocks the IP addresses of suspected VPN servers (they may see many multiple users trying to access the site from that location).

If this happens, change the server location on your VPN. This will give you a new IP address, and eventually, you should find one that has not been blocked.

This is a major advantage of high-quality VPN services, such as ExpressVPN. They may have hundreds or thousands of servers located in the US, so it is likely that you can find an IP address that has not been blocked. At the same time, premium VPNs are constantly working to replace banned addresses with new ones.

Summary – if you still get an error while trying to see movies on Hulu, go to your VPN server list, and connect to another one. This should solve the problem.

Further VPN guides we recommend you to check out:

Additional use cases for VPNs:

Do you need a US Payment Method to access Hulu?

Unlike some other streaming services, such as TLC, you cannot simply access the site and start watching. You need to sign up for an account and submit payment details.

The basic plan is $5.99 per month, but there is a 30-day free trial available. Note that your payment details are required from the beginning, even if you do not continue for more than a month.

Hulu requires that you submit the payment information of either:

As Hulu geo-restricts its content, it is unlikely you will be able to access it from outside the United States, without a VPN or similar device. In order to access Hulu, we recommend that you use a VPN that allows access through multiple US servers.

Can I use a free proxy for Hulu?

No. Hulu and other streaming services have strong detection mechanisms. Using free proxy servers and even free VPNs is not recommendable as they may not work. Additionally, free services are often congested, slow, and they have limited bandwidth with data caps.

Why isn’t Hulu working with my VPN?

Even reputable VPNs may at times not work with Hulu. In this situation, you will need to change through various US servers. This happens if Hulu has blocked the VPN’s server IP address. It affects the whole pool of the server’s IP address.

Additionally, you might need to clear your browser’s or app’s cache and try again.

Hulu is a geo-restricted on-demand streaming service. It is only available in the US, Japan, and other US territories, including military bases. To sign up for Hulu, you will need to change your geo-location. You will also need a US form of payment. You can also use PayPal and Venmo.

How to get around Hulu blocked device or home location error?

Hulu has various restrictions that ensure you don’t share your account. Some features such as Live TV are only available to members of a single US residence. These restrictions involve the use of your home network IP address. If you travel abroad regularly, you might need to use a dedicated/static VPN IP address when signing up for Hulu.

How to solve anonymous proxy error messages from Hulu?

You will get this error when you use a proxy server, some VPNs, or some other ways to access Hulu outside the US. If you get this error while using a reputable VPN, disable your IPv6 address. Most VPNs don’t support IPv6, and your ISP may service their request.

This action will give away your location, and you won’t be able to bypass Hulu geo-restrictions.