Opera VPN Not Working – How to fix?

This issue has many users wracking their heads in desperation because Opera is one of the few browsers out there that has an in-built VPN service. You’d no longer need to install any further clients to connect to the private network.

For other options, check out this article about browsing the internet privately.

In 2017, Opera VPN was acquired by SurfEasy VPN, and is now used as a white-label. However, there are still plenty of instances where this browser-based VPN shows extensive problems.

It often occurs when users can’t connect to the network, at which point they get the message – VPN is temporarily unavailable.

OperaVPN is an OK free VPN but it does not have nearly the same performance as a Premium VPN. You should try out ExpressVPN if you want Premium and hassle-free features and services.

Since your goal is to remain anonymous and safe on the internet, here’s a list of the most common fixes for this error:

Many users, including the Reddit experts, have said that simply turning the VPN off and back on will make it work again. To do this, click on the VPN button on the top left corner of the Opera browser, then toggle the VPN off, and then on again.

More often than not, clearing the browser cache can fix many issues, and this time isn’t any different. In order to do this, press the Ctrl + Shift + Del command.

This should open up this tab: 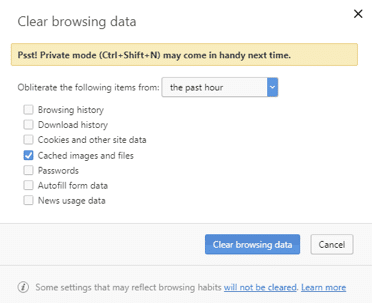 Feel free to check all the boxes there in order to completely clear the cache. But the Cached images and files check box is most important.

On the drop-down menu, just select the beginning of time option. No, this won’t let you see the Big-Bang taking place, but it will clear all the cache ever since the computer was first used (or since the cache was last cleared).

If this doesn’t resolve the issue, keep on reading.

Close down all the extensions and see if this works.

Press the Menu button on the top left of the Opera window. Then select Extensions – Extensions to open the following tab.

Then, select the Enabled option on the left panel. Lastly, press the Disable button for all the listed tabs.

Switching off your Antivirus software

Even more so than browser extensions, antiviruses have the bad reputation of screwing around with any third-party application, VPNs especially.

Many users have solved their VPN is temporarily unavailable issue by turning off their anti-virus off.

To do this, simply right-click on the system tray icon, and select the disable or turn off option from there. Alternatively, you might have to do this from the main antivirus panel.

Another solution would be to add the Opera VPN to the antivirus’s exception list. This solves pretty much all issues of this kind, because the antivirus will often block off certain features of any unknown third-party apps.

Now, most if not all antiviruses include certain whitelists where you can add software of URLs that you want to exclude from the threat screening process. Usually, you should find the Exclusions tab in the settings page of your antivirus, but it depends on the product.

In there, just add the following URL – https://www.operavpn.com

Opera VPN should be working correctly now, without that annoying error standing in the way. If this is still not enough, stay tuned, there are a few other options you can try.

Switch off the Windows Firewall

Just like the Antivirus, the Windows Firewall was specially devised with one purpose in mind – to track down any unknown and suspicious third-party app that could threaten the end-user.

The result – some functions of the app are blocked off by the Windows Firewall.

What are you still doing here? Still not working, eh? Two more solutions to go then.

Switch Opera to an Optimal Location

Opera VPN has a drop-down box where you can find the Optimal Location option. If it’s not checked as enabled, that could be the reason why the VPN isn’t working. So, check it.

Press the VPN button at the left of Opera’s URL bar to see if this is the problem.

Sometimes, the easiest solution really is the correct one. If an app is not up to date with the latest changes and repairs, then it will have unresolved issues. You should check if there are any available updates for the Opera Browser, just to take a load off your chest.

Who knows, maybe this was the problem all along.

To do this, just click on the Menu button and select the About Opera option to open the following tab.

At this moment, Opera will automatically search for any new updates, download, and install them.

After that, press on the “Relaunch Now” button to restart the browser.

One of these solutions should get you up and going, and away from that error. Opera VPN is a pretty good online security provider, at least that’s what most users say.

However, in April of 2018, Opera has announced that they are shutting down the VPN for iOS and Android users. Many netizens are now looking for other free VPN services which are worth a shot.

But many aren’t prepared to risk their safety and privacy by trusting some dubious free VPNs. They have a filthy reputation of screwing around with your data or even selling it to the highest bidder.

Even the cheapest VPN on the market is much better than any free crap you can find out there.

While Opera VPN is pretty ok, it does not have the same features as a real premium VPN. For example, with OperaVPN you will not be able to unblock service such as Netflix. For this, you need a premium VPN like those described in our best VPNs for Netflix list.